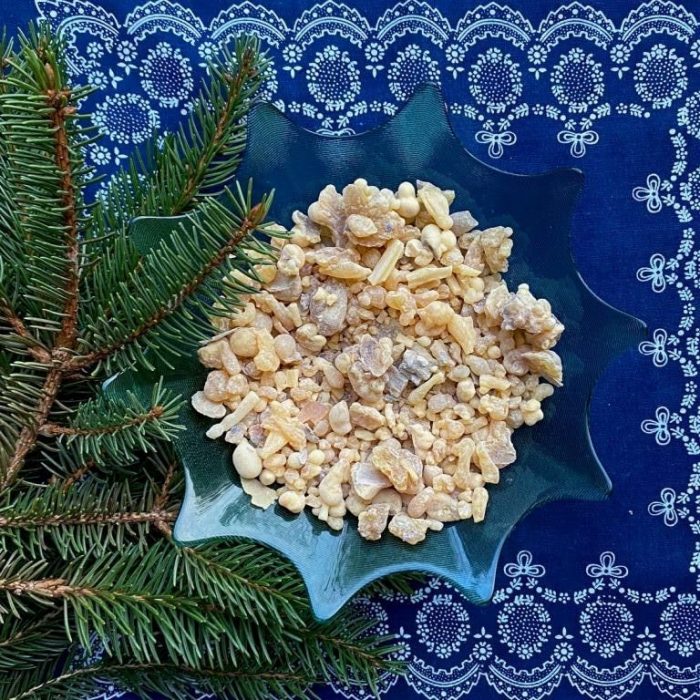 Frankincense and myrrh are known to many because of their appearance in the Christmas story. According to St Matthew’s gospel (2:2-11), when Jesus was born in Bethlehem,

‘there came wise men from the East to Jerusalem, saying: “Where is he that is born King of the Jews? For we have seen his star in the East, and are come to worship him”’.

The gospel goes on to tell how the star the wise men saw in the East went before them, till it stood over the house were Jesus was born. The men came into the house and worshiped Jesus, and ‘when they had opened their treasures, they presented unto him gifts: gold, and frankincense, and myrrh’.

The wise men became known as the Magi from the Latin word magus, ‘magician, priest, someone with a special knowledge’. From the 6th century onwards they came to be seen as kings because several Old Testament books, including the Book of Psalms, tell that the Messiah will be worshiped by kings. Their visit is remembered on the 6th of January at Epiphany, also called the ‘Feast of the Magi’. The name ‘Epiphany’ derives from a Greek word meaning ‘revelation’, signifying the moment when new born Christ was revealed to the world. In some cultures, including Spain and Latin America, presents were traditionally given at Epiphany rather than at Christmas.

In several countries Epiphany is also celebrated with special deserts. The best known of them is French galette des rois (‘king’s cake’), a truly lovely cake made from flaky puff pastry with an almond or apple filling. We have one delivered each year from a local bakery and I recommend it very highly. It comes with a gold paper crown and a toy, different each year. Traditionally the toy was hidden in the cake, and the person who found it in his or her slice became ‘king’ for the day.

Interestingly the shrine of the three Magi is now behind the high alter in the Cologne Cathedral in Germany.

Frankincense and myrrh are both resins of trees that grow in Africa and India. Frankincense is obtained from Boswellia sacra (‘sacred Biswellia’) and other trees of the genus Boswellia. Myrrh is extracted from Commiphora myrrha and several other species of the genus Commiphora. Both Boswellia and  Commiphora are small shrub-like trees that grow in arid desert conditions. The resin is harvested by making incisions in the bark of the trees. When the bark is cut, the trees secrete white milky sap that solidifies to become crystals. There are no special cultivation practices for the trees, and Boswellia is now believed to be threatened by habitat loss and over-exploitation.

Frankincense and myrrh are sold as semi-transparent white, yellow or brown crystals with a faint pleasant spicy smell. Both have been valued highly and treated as luxury for thousands of years. In the gospel story they appear next to gold as part of a truly royal gift of the wise men to Christ. Because they were so desirable, they contributed to the establishment of lively trade in the Arabian peninsula and economic development of the areas where they grew. The spices were exported to Europe and Asia leading to cultural and economic exchanges between people living very far apart.

How are they used?

They were and still are used as incense, perfume and medicine. In the Song of Solomon in the Bible the bridegroom is said to be ‘perfumed with myrrh and frankincense, with all powders of the merchant’. In the gospels Christ is offered ‘wine mingled with myrrh’ before crucifixion (Mark 15:23) which he refuses. Commentators point out that this was a merciful custom among Jewish women to offer this drink to prisoners condemned to death to dull their senses and alleviate pain.

Like many aromatic plants frankincense and myrrh have strong antiseptic properties. During the epidemics of the black death in medieval and early modern Europe mixtures of frankincense, myrrh, juniper, sulfur and ammonia were burned in homes and public buildings as a sanitary measure in hope that this will stop the spread of the disease. Myrrh was dissolved in alcohol to make a tincture that was used as a medicine for teeth and mouth diseases. In powdered form myrrh was sprinkled on wounds as an antiseptic. The smoke of both myrrh and frankincense was inhaled as a medicine for lung diseases. Both are still used in natural medicines, perfumes and cosmetic creams and oils.

Probably the most important use of frankincense and myrrh has been as incense in religious ceremonies throughout human history, in ancient Egypt, Israel, Greece and Rome. Greek and Roman writers mention them as some of the most important goods arriving from the east. From Judaism the custom of using these spices in rituals passed to Christianity.

How to Use Frankincense in an Incense Burner

I bought frankincense and a traditional incense burner during a trip to Oman, before Covid, when it was still possible to travel. Oman is one of the largest producers of frankincense, and there it is still very much part of everyday life. Burners with frankincense and other perfumes are lit in early evening in homes and hotels, dispersing a lovely uplifting scent and creating a wonderful atmosphere of comfort and calm. Yesterday I lit my burner in memory of this happy time and in honour of Epiphany, as I do every year. In addition, who knows, may be medieval physicians were right about purifying properties of myrrh and frankincense and their usefulness during a pandemic?

For an incense burner you need the following:

All you really need is an heatproof surface and a source of heat, traditionally a burning piece of coal. I use convenient charcoal discs.

1. Take a charcoal disk with tongues and hold it for 2-4 minutes over fire. You can use kitchen or barbecue tongues, designed to turn steaks and other food when frying. The fire can be a candle, though it is quicker to lit a disk on the gas fire.

2. Check that the disk is lit. It should emit heat that you will feel if you hold your hand above it. Be very careful not to touch it for it will be very hot. It can turn whiter from heat or glow red, though glowing is usually visible only if you very gently blow at it.

4. Put a few frankincense crystals on the disk. You need very little, otherwise the smell will be overpowering.

5. If a burner has a lid, put the lid on. Many incense burners, including those sold by the experts in Oman, are open, but I think a lid is a useful precaution since charcoal gets very hot.

6. Put the burner somewhere safe where it cannot be knocked down. I  put mine on the fireplace. Very soon the house will be filled with lovely perfume.

Lighting an incense burner is a lovely ancient custom that allows us to feel a connection with the past and with far-away people and places. Frankincense and myrrh are wonderful gifts of nature that have been enjoyed for thousands of years. Their exceptional cultural and historical importance is something to contemplate and celebrate.