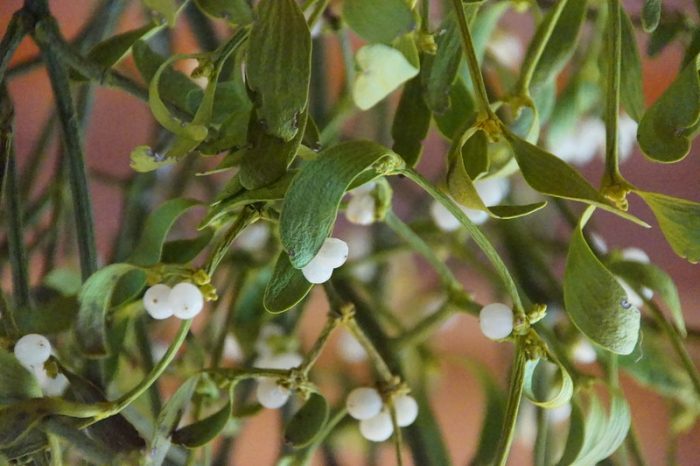 Like several other evergreen plants, mistletoe is used to decorate homes at Christmas. It has a very long history of use in medicine, and there is evidence of its significance in ritual and myth.

A famous testimony about the use of mistletoe by the druids comes from a work by a Roman naturalist and philosopher Pliny the Elder (23/24-79AD), who died during the eruption of Vesuvius in 79AD, while attempting to rescue a friend and his family. Pliny’s only surviving work is the Natural History, an extensive compendium of knowledge about the natural world in 37 books. Chapters 91-95 of book 16 give an account of mistletoe.

Pliny first reports that mistletoe was used to make birdlime. Berries were gathered while still unripe, because, as he explains, when the rainy season arrives, they increase in size, but their ‘viscous juice loses its virtues’. The berries were then dried, pounded, and put in water in which they were left to rot for twelve days. As Pliny wisely comments, ‘this being, in fact, the only thing that finds improvement in decay’. Following this the berries were again beaten in running water with a mallet to make them shed the outer coat. The remaining viscous inner pulp was birdlime. It was thinned by the addition of walnut oil and used for catching birds. According to Pliny, it is ‘quite sufficient if they only touch it with the wings’. Commentators on Pliny’s work note that this method of making birdlime continued to be used in Italy and other countries in modern times. The pulp of mistletoe berries is indeed very sticky, as anyone can easily discover by crushing one of the berries between fingers.

Chapter 95 of book 16 of the Natural History deals with ‘historical facts connected with the mistletoe’. Pliny tells how it was used in Gaul (modern France) by the druids—‘for that is the name they give to their magicians’. The druids held nothing more sacred than the mistletoe that grows on an oak. According to Pliny, the oak was generally sacred to the druids. They performed their religious rites in oak groves, and believed that everything that grows on an oak ‘has been sent immediately from heaven, and that the mistletoe upon it is a proof that the tree has been selected by God himself as an object of his especial favour’. Mistletoe, however, rarely grows on oaks, and when found, is gathered with special rites. This was done on the fifth day of the moon, a day on which the Gallic tribes traditionally began their months and years. This day was selected because on it the moon, whose name in the druids’ language meant ‘all-healing’, though not yet in the middle of its course, had already ‘considerable power and influence’. The following is Pliny’s description of the rite of gathering the mistletoe:

‘Having made all due preparation for the sacrifice and a banquet beneath the trees, they bring thither two white bulls, the horns of which are bound then for the first time. Clad in a white robe the priest ascends the tree, and cuts the mistletoe with a golden sickle, which is received by others in a white cloak. They then immolate the victims, offering up their prayers that God will render this gift of his propitious to those to whom he has so granted it. It is the belief with them that the mistletoe, taken in drink, will impart fecundity to all animals that are barren, and that it is an antidote for all poisons. Such are the religious feelings which we find entertained towards trifling objects among nearly all nations.’

As can be seen from this, Pliny does not mention the winter solstice or any particular time of the year, though he links the occasion of gathering mistletoe with the phases of the moon.

Perhaps the most interesting legend about mistletoe, that I know of, is told by a 13th-century Icelandic writer Snorri Sturluson (1179 – 1241). It occurs in his work known by a modern title the Younger Edda. It is a treatise on poetic composition where the prologue and the first part contain an account of the Viking age Scandinavian mythology. This is because many metaphors and other devices used by the poets of that time could not be understood without the knowledge of myths they referred to. Among other stories there is a myth about mistletoe.

Snorri  says that the god Baldr was the second son of Odin, the ruler of the gods in Scandinavian mythology. He was ‘the best’ and praised by all. He was so fair that light shone from him. He was also the wisest of all the gods, most beautifully spoken and most merciful. Snorri comments that there is a plant ‘so white that it is called after Baldr’s eyelash. It is the whitest of all plants, and from this you can tell his beauty both of hair and body’. I wonder, which plant did Snorri have in mind?

Snorri also comments that it was one of Baldr’s characteristics that ‘none of his decisions can be fulfilled’. This anticipates the sad development of the story. Baldr had dreams foretelling danger to his life. When he told about this to the gods, they held council and decided to request immunity for Baldr from all kinds of danger. His mother, goddess Frigg, went around the entire world, asking all things to promise not to harm Baldr. She received solemn promises from fire and water, iron and all kinds of metal, stones, the earth, trees, diseases, the animals, the birds, poison, snakes and all other things. When this was all done and confirmed, it became entertainment for the gods and Baldr to test these promises. At assemblages the gods would shoot or strike at him, or throw stones at him. But whatever they did, he was unharmed, and ‘they all thought this a great glory’.

It is never a good idea, however, to tempt fate. One of the gods, called Loki, is a very strange character in Norse mythology. In various myths he is a source of mischief, sometimes deadly to others and himself. He may have envied Baldr, because he was displeased that Baldr was unharmed. Loki changed his appearance to that of a woman and went to Frigg, Baldr’s mother. In a conversation Frigg repeated to him that she had received oaths from weapons and wood that they would not harm Baldr. The woman (Loki) asked, have all the things sworn oaths? To which Frigg replied that there grows a shoot of a tree, called mistletoe, and it seemed to her too young to demand an oath from.

Loki immediately disappeared, took mistletoe and went to the assembly. In the circle of gods throwing things at Baldr stood Hod who was blind and could not participate in the game. Loki invited him to join in, gave him a mistletoe stick and offered to direct him. Hod shot at Baldr at Loki’s direction, the mistletoe pierced Baldr and he fell dead to the ground. Snorri comments that this was ‘the unluckiest deed ever done among gods and men’.

This is followed by a very interesting description of the gods’ grief and Baldr’s funeral. The gods tried to redeem him from the underworld, called Hel in Scandinavian mythology. The goddess of Hel said that she wanted to test  how much Baldr was loved, and that he would be allowed to leave if ‘all things in the world, alive and dead, weep for him’. The gods sent messengers all over the world to request that ‘Baldr be wept out of Hel’. All wept for him, the people and animals, the earth, the stones, trees and every metal, ‘just as you will have seen that these things weep when they come out of frost and into heat’. All wept, except Loki who turned into a giantess and refused to weep, and so Baldr stayed in Hel.

The story goes on to tell of the gods’ revenge on Loki. At one point he was living in a house with four doors that he built in the mountains, so that he could see in all directions. At the same time he also occasionally turned into a salmon and was hiding in a waterfall. The gods got him in the end, but this is a story for another time.

A good translation of the Younger Edda is Snorri Sturluson, Edda, transl. by Anthony Faulkes (London, Everyman, 1987). I highly recommend it – it has a useful introduction, explanatory notes, and the stories themselves are absolutely fascinating, and just the right reading for the dark months of the year, December and January.