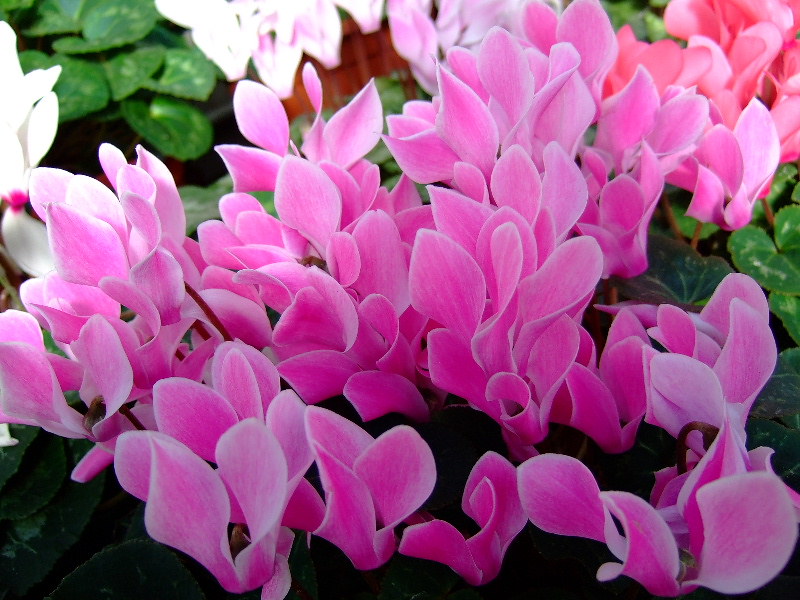 There are many different varieties of cyclamen, but the ones that appear in flower shops and garden centres in early autumn are the Persian cyclamens (Cyclamen persicum). They are spectacular plants with large, beautiful and unusual flowers, with upswept petals resembling the wings of a butterfly. They come in a variety of colours of amazing purity and brightness that illuminate the dull days of autumn.

Persian cyclamens look wonderful planted in a large ceramic bowl that allows you to combine different shades of white, pink and red. They are exceptionally prolific: their flowers last for about 10 days, but throughout the season there can be up to 50 of them on a single plant. Cyclamens are naturally perennial and long lasting, and can live for 25-27 years. Unfortunately, most quickly die, whether grown indoors or outside, because it is not easy to create the right conditions for these southern plants.

Cyclamens prefer a bright position, but without direct sunlight. They are cool weather plants and need a temperature of 6-15C during flowering. The soil should be constantly moist, but not waterlogged. When watering cyclamens, it is important not to spray on the corm, and the base of leaves and buds because this can cause them to rot. Ideally the pots should be placed in trays of water and allowed to absorb it. Any yellowing or dying leaves and flowers should be removed together with their stalks by breaking them off as close as possible to the surface of the corm – this also helps to prevent rot.

After flowering leaves die off and the corm enters a period of rest. In their natural habitat in North Africa, Cypress, Syria and Greece this coincides with a hot summer weather when the plants are dormant. The pots should be kept in shade and watered occasionally so that the soil does not dry out completely. In August small leaves will start appearing and this is the time to replant cyclamens. A mixture of garden soil, leaf mould and sand can be used, and the corm should not be planted deeply – about a half needs be exposed above the soil. Following replanting, cyclamens should be given a cool, bright, but shaded from the sun position. After a month buds will start appearing.

Cyclamens easily produce seeds, and when the seed pods starts to form, the flower stalk curls and bends down, hiding them under leaves and pressing the seed into the ground as it ripens. In some species of cyclamen it coils very distinctively, and the name ‘cyclamen’ reflects this habit of the flower stalk – cyclos means a ‘circle’ in Greek.