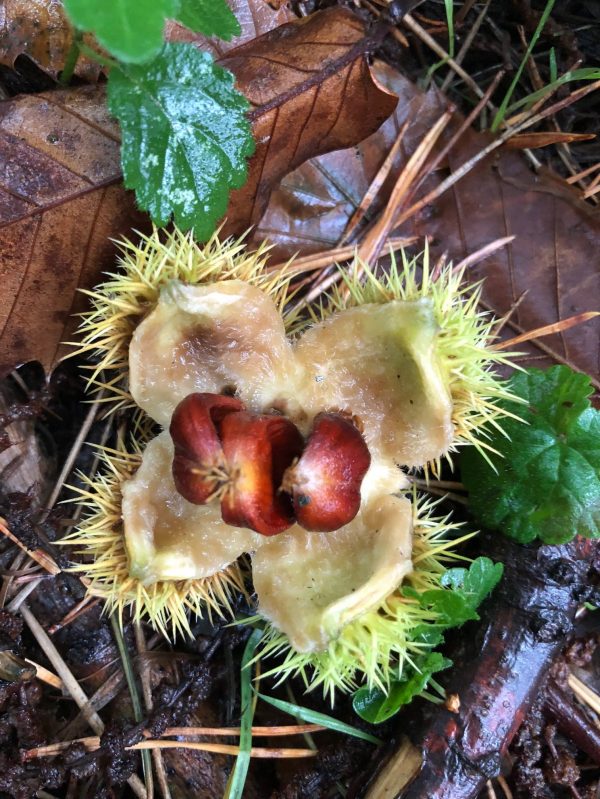 ‘Wilding‘ by Isabella Tree (Wilding: The Return of Nature to a British Farm, Picador, 2018) is one of the most inspiring books recently published. It is impossible not to be influenced by it – it changes how its readers perceive nature, farming, countryside, and their own gardens.

Isabella Tree is an established author who published several other books on nature and travel. She is married to Sir Charles Burrell, and together they manage the 3,500-acre Knepp estate in West Sussex, UK. The book describes the history of a wilding project they started at Knepp in 2000.

Horrors of Knepp before wilding: the chemicals

‘Wilding’ by Isabella Tree begins with an account of the family’s industrial-scale intensive farm before they embarked on the project. An aptly named chapter 2, ‘At Odds with Everything’, is an uncomfortable reading. It vividly portrays the ‘normal’ farming practices that often escape the attention even of an interested outsider. Among them is the use of truly industrial amounts of chemicals.

This is how Tree describes the ‘increasingly expensive’ regimen for wheat and barley before wilding at Knepp:

‘In addition to regular doses of artificial fertiliser, the plants had to be sprayed with two fungicides as they emerged from the ground, and a plant-growth hormone to prevent them growing too tall… As they grew, they were given another cocktail of fungicides and growth hormones, followed by a third in the most rapid stage of stem growth and a final dose as the grains begin to develop’ (p. 34).

The hell of dairy production

Describing dairy production, Isabella Tree writes about ‘agonizing nights’ she experienced when staying on the estate when it was managed by her husband’s grandparents. She had to listen to the bellowing of calves newly removed from their mothers. They were taken away just three days after birth, and put into separate units, where they were fed on powdered milk from an automated machine.

Tree explains that mothers would call for their calves sometimes for days, ‘as they re-joined the treadmill of milk production for human consumption’ (p. 102). According to Tree,

‘A dairy cow’s life is unrelenting. By five or six years old, having produced three or four calves and an average of 22 litres of milk every day for 365 days a year (we had one cow that, during peak lactation, gave us 75 litres a day), she is ready for the knacker’s yard, her meat good for little more than dog’s food and meat pies’ (p. 102).

The unnecessary cruelty and absurdity of the situation is underpinned by the fact that milk is massively overproduced in Europe. In order to bring its production under control quotas were established in 1984 which capped the quantity of milk a farm could sell. As a result, the Knepp estate had actually to buy additional quotas, spending £240,000 a year, in order to sell its intensively produced milk.

Chapter 3 starts with a sense of relief, almost physically felt by the reader, of abandoning the unsustainable farm:

‘From our windows industrial farming had vanished. No excavated soil, no machinery, no serrated ranks of arable, no fences. Returning the park to permanent pasture was more than a lifeline to oak trees: it was proving a tonic to us. The land, released from its cycle of drudgery, seemed to be breathing a sigh of relief. And as the land relaxed, so did we’ (p. 43).

‘Butterfly blizzard’ and other joys on the journey to wilding

What follows is an moving progression towards regeneration and return to normality that neither the owners of Knepp, nor the readers, are willing to abandon. And this is in spite of many frustrations and at times a painfully slow pace.

With every chapter there is a growing feeling of joy inspired by the project’s success. There is also hope that if things can get better at Knepp, they can eventually improve elsewhere.

‘Wilding’ by Isabella Tree tells a dramatic story about a ‘butterfly blizzard’. This is when tens of thousands of painted lady butterflies arrived to the estate to restore the natural balance. Without any human help they quickly put an end to a monoculture of creeping thistle, a threat to civilized agriculture in the eyes of local farmers. It was dramatic, beautiful and relentlessly effective.

Among many wonderful stories, there is also an account of the nightingales and turtle doves returning to Knepp. Once plentiful in Britain, they are now almost entirely unknown.

There is also an exhilarating narrative about the re-introduction of beavers. This was before Knepp was allowed to have its own beavers, and what Isabella Tree describes is a trial at a site in Devon. She reveals that it was kept secret and fenced with a £35,000 steel fence to prevent an escape, as if it housed some horror-film alien monster.

Tree describes an ‘astonishing’ effect of the project on wildlife. The ‘tiny beaver kingdom’ became thick with butterflies, hoverflies, damselflies and dragonflies. Its riverbanks were full of water mint and orchids. And it housed an abundance of herons and kingfishers diving for fish. In addition, a filtration system created by beavers reduced to virtually nothing nitrates and phosphates pollution entering the river as a run-off from the surrounding farm.

There is a separate chapter on ‘wilding the soil’. As Isabella Tree points out, over the years modern farming reduced the soil to what microbiologists describe as ‘dirt’. It is ‘a sterile medium in which plants struggle to grow without artificial fertilisers’.

Isabella Tree calls it a ‘self-perpetuating cycle of destruction and chemical dependence’ (p. 275). Chemicals kill the soil organisms, but without them nutrients remain inaccessible to plants. To complete the vicious circle, the soil becomes compacted and prone to erosion.

A brief history of artificial fertilizers

Isabella Tree’s ‘Wilding’ is very well researched – it is full of numbers and historical information. A typical example of this is her brief, but very revealing history of artificial fertilizers.

As Tree points out, their rise happened after the Second World War. This was the time when manufacture was switching from munition to agricultural chemicals. A move from ‘poison gas to pesticides and herbicides’, seemed like a good solution to industrialists. And this created an industry with a vested interest in driving up arable production, particularly in the US. The US had a stronger economy than European countries and as a result became a major producer and exporter of agricultural chemicals.

As Isabella Tree notes, the growth of arable did not remain unopposed in post-War Britain (p. 22). Its environmental cost was evident from the start. And as Tree demonstrates, this cost is astronomical, from the effect on people’s lungs to the decline in the nutritional value of food, from the depletion of soils to pollution of drinking water (p. 280).

A new approach to conservation

‘Wilding’ by Isabella Tree advocates a new approach to conservation. It condemns the prevalent strategy as short-sighted, expensive and unsustainable. The conventional approach focuses on individual species in small and isolated sites, and is ‘driven by the mentality of “man knows best”’ (p. 200). Instead Tree proposes a strategy that focuses on entire ecosystems and their ability to self regulate and regenerate.

And this is the approach that seems to be winning public sympathy now. A recent announcement of the WildEast project is evidence of this. A tremendous support it has received shows that Knepp’s conservationist, sustainable farming and economic success is inspiring others. Established by three farmers from Suffolk and Norfolk, the most intensively farmed region of Britain, WildEast aims to dedicate 250,000 hectares of East Anglia to wildlife.

It is impossible not to be moved by Isabella Tree’s spirited and compelling advocacy of new conservation. Hopefully her ‘Wilding’ will continue to inspire and enable change. It is relevant to all, not just conservationists and landowners. I changed how I garden after reading it. Its philosophy works on any scale, from a large farm to a windowsill garden.

Review of Peter Wohlleben, The Hidden Life of Trees

How to Attract Sparrows to your Garden

Pin ‘Wilding by Isabella Tree: a Review’ for later