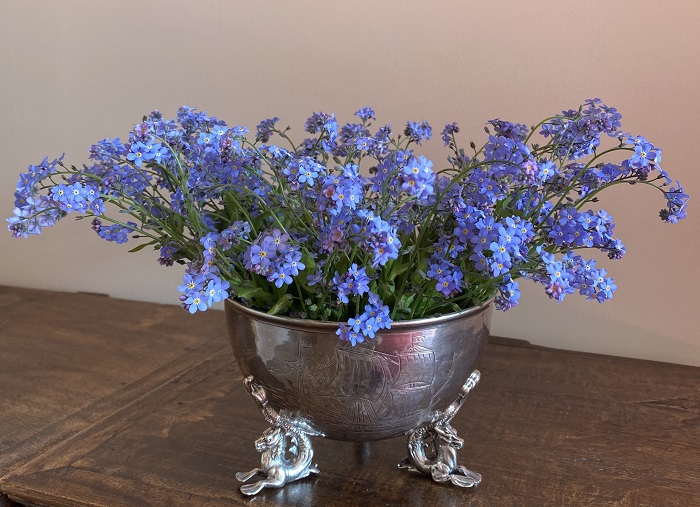 Forget-me-not is a truly beautiful flower with petals of the colour of the sky on a sunny day and a bright yellow centre that looks like it is made of gold. It became a symbol of memory and loyalty, presumably at least partly because its beauty is indeed difficult to forget. It also lasts very well as a cut flower and can therefore act as a reminder of a spring walk, a celebration or a person who gave it.

Growing forget-me-nots in a garden is easy and rewarding. They are rightly popular with gardeners and are a much loved, culturally important flower in many countries.

The meaning of the name ‘forget-me-not’

The Latin name of forget-me-nots is ‘myosotis’ which translates ‘mouse’s ear’. Forget-me-nots probably got it because of their soft downy leaves covered with tiny hairs. When the leaves are young, they indeed look like ears of a small animal.

There are numerous legends about the origin of the name ‘forget-me-not’. They usually involve a separation of lovers. Thus, in Germany forget-me-nots were said to have grown from the tears shed by a bride when parting with her groom. When the young people saw the plant that grew from the girl’s tears, they named it ‘forget-me-not’ and promised to pick it, and keep it as memory of their love, wherever they found it.

1. Forget-me-nots in legends of Christian Europe

There is a legend that the name ‘forget-me-not’ was given to the flower by God himself because it forgot the name that was originally given to it at creation. In Christian Europe forget-me-nots were seen as a symbol of faith and God. There was a belief that their sky-blue colour was meant to remind humans about their immortal soul, heaven as the soul’s future dwelling, and about a great promise of future life given by God, a pledge that humans never fully forget.

There are numerous stories about forget-me-nots appearing on graves and on battlefields as a reminder to the living of those who died, particularly of those who passed away before their time. Thus, it was reported that after the Battle of Waterloo forget-me-nots covered the whole field. The origin of such legends is not difficult to understand: forget-me-nots love growing on disturbed soil where they have little competition from other plants.

There was also a belief that the sap of forget-me-nots hardens steel. Apparently to harden a blade you need to dip it, while it is red hot, in the sap extracted from the plant, and keep it there until it cools. Steel made in this way is so hard that it cuts iron and whetstones. Celebrated Toledo and Damask swords were reported to have been made in this way.

2. Forget-me-nots in legends of the Middle East

According to a beautiful Persian legend an angel fell in love with a mortal girl and because of this was expelled from Paradise. He saw her for the first time on the bank of a river as she was decorating her beautiful hair with forget-me-nots. The angel was told that he will be allowed to return to Paradise only if the girl plants forget-me-nots in every corner of the Earth. The girl decided to accomplish this difficult task. For many years, in any, even most miserable, weather, she wandered around the world planting forget-me-nots. When she finished her work, she and the angel came to Paradise and were allowed to enter. The guardian of Paradise said that the girl was admitted to heaven, without death, because her love was greater than a desire to live. Also she loved an angel, and love for anything heavenly protects from earthly corruption. The guardian said: ‘Let her taste the joys of Paradise, the greatest of which is devoted love’.

3. Forget-me-nots in legends in Germany

In German legends forget-me-nots have a role ascribed to many other flowers as well – they reveal the location of treasure hoards. If you find a forget-me-not growing by the road, you need to pick it, go to a nearby rock, and touch the rock with a flower. The rock will immediately open and reveal a cave full of gold and gemstones.

Whenever this happens, a mysterious voice always warns the lucky person that they can take anything they want, as long as they don’t forget the most precious of the treasures – the flower forget-me-not. But since humans are so greedy for gold, they become intoxicated with their unexpected wealth. They fill their pockets with gold and jewels, and forget about the flower. And as they leave, the voice repeats ‘Don’t forget to take the best’, but it is already too late. The entrance to the cave has closed without a trace, and the consequences of disobedience and greed become apparent. The gold in the person’s pockets turns to dirt and jewels to stones.

In Germany there was also a tradition to celebrate the flowering of forget-me-nots. In schools lessons stopped after lunch and children with a teacher went to the countryside to see forget-me-nots. Children spend time playing games and collected bunches of flowers to take home. Flowers were then kept in water at home and admired as a memory of an enjoyable spring outing.

Adults, and whole families, went on such outings as well year after year. They brought flowers home, had a special meal, including cakes and coffee, and made such merriment that memory of a joyful celebration lasted the whole year.

4. Forget-me-nots in May Day celebrations in England

In England forget-me-nots were part of May Day festivities. Records of such celebrations survive from as early as the 15th century, but they were surely much older. The celebration took place on the 1st of May when forget-me-nots are plentiful and at the height of their beauty.

It was a celebration of spring and the revival of nature after winter. There was a custom of going to the countryside to enjoy its beauty and to collect flowers and greenery. In the evening there were theatrical performances, dancing and bonfires.

May Day was apparently regularly celebrated at the royal court during the reign of Henry VIII. The court travelled to Greenwich where the king was entertained with jousting tournaments, music, and performances. The celebration included a banquet served in tents in a wood.

Later in the century the tradition was re-invented as a children’s festival. Art critic, philosopher and philanthropist John Ruskin (1819 – 1900) was particularly influential in promoting May Day festivities. Due to his efforts it started to be celebrated in numerous women’s schools in England, Scotland and Ireland. May Queen was chosen among the pupils, and not for her beauty, but for academic achievements and for kind and friendly character that inspired love and respect of all.

But even outside the May Day celebrations forget-me-nots were an important symbol in England. Henry Bolingbroke (1367 – 1413), grandson of king Edward III, chose it as his personal emblem while in exile abroad. He retained it when he became the king of England as Henry IV in 1399.

Forget-me-nots prefer wet soil. Species of wild forget-me-nots are often found on the banks of rivers and ponds. In gardens, however, they can grow on almost any soil without any watering. This is because they develop early in spring when the soil naturally preserves moisture from winter. As they grow and flower, they form dense clumps and protect the soil from drying.

Forget-me-nots can grow well both in full sun, and in considerable shade. To look their best, they need 3 to 6 hours of sun during the day. Partial shade is ideal, because in full sun their flowering is reduced to about 20 days instead of the normal 30-40 days.

Forget-me-nots love disturbed soil and because of this can be a formidable weed in the garden. They are extremely prolific and self-seed abundantly. Once introduced into a garden, they are likely to persist. Typically, seedlings start to grow in the second half of the summer. In milder climates they easily survive the winter and flower in spring.

Forget-me-nots are generally trouble free and do not suffer from pests and diseases. As they decline after flowering, they can develop mildew, but this is the time to remove them.

Forget-me-nots are often grown with spring bulbs, including tulips and daffodils. They combine well with lily-of-the-valley. One has to be a little cautious, because they are vigorous and very fast growing plants, and can easily overwhelm their slower growing neighbours. As annuls, however, they die off in June, leaving space for other plants. If they are grown on their own, this is the time to replace them with something else.

They therefore combine well with large vigorous plants that flower later in the season. For example, they grow beautifully with roses. I occasionally see this combination in gardens and always wonder why it is not used more often.

Forget-me-nots finish flowering and can be removed just as roses reach the top of their development, producing abundant glossy shoots and getting ready to flower. One does not even need to worry about planting seeds for next year because after a couple of years there will be enough seeds in the ground. If the ground is lightly loosened in late August or September, seedlings will naturally appear and can be left to flower in spring.

As a vigorous plants, forget-me-nots make good and very attractive ground cover for spring and early summer. They easily suppress the growth of weeds that tend to develop at the same time in early spring.

Forget-me-nots are an excellent cut flower. Once they are established in the garden, they produce so many flowers, that picking them to decorate the house does not seem to make any difference to the look of the garden. They last for a very long time in a vase, particularly if the water is changed from time to time. In such conditions they will easily flower for about two weeks.

In the past people often arranged them in a circle, resembling a wreath, in a deep plate or bowl.

Forget-me-nots combine very well with other spring flowers in a vase, including tulips, daffodils, and even lily-of-the-valley. All plants have an ability to suppress the growth of their neighbours by releasing special biochemicals. This is known as allelopathy. Lily-of-the-valley is known for very high levels of allelopathic activity. It therefore shortens the life of other flowers in a vase. As florists have known for a long time, however, it does not have this effect on forget-me-nots.