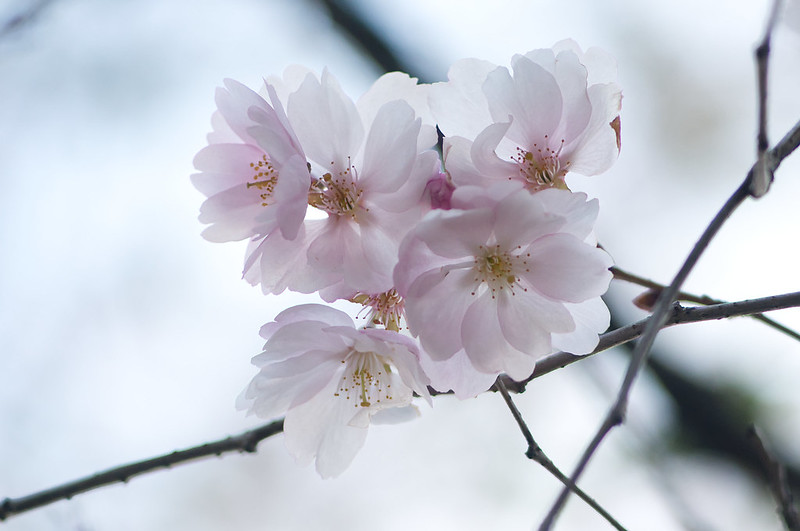 Cut branches of many fruit and ornamental trees and shrubs can develop leaves and flower indoors if given the right conditions in winter.

It may even be possible to have cherry branches blossoming in time for Christmas. In northern European countries, particularly Germany and Russia, there was a tradition of St Barbara flowers. Branches of flowering trees, most commonly cherries, were brought indoors and placed in water on the 4th of December, the feast of St Barbara, a Greek saint who, according to a legend, was executed for becoming a Christian in the 3rd century. Branches were traditionally broken off rather than cut and there is a reason for this – braking off the ends of branches exposes wood fibers and makes it easier for water to be absorbed. Flowering branches were brought to churches on Christmas day, and there was a belief that a girl whose branches did not blossom exactly on Christmas day, but opened either earlier or later, will not get married that year.

St Barbara was widely venerated in the Middle Ages and later, believed to be one of the ‘Fourteen Holy Helpers’ – saints whose intercession was considered to be particularly powerful. This probably contributed to the popularity of the tradition of starting branches expected to flower at Christmas on the 4th of December.

In order to flower, however, tree branches need several weeks of exposure to cold, namely at least 8 weeks of temperature of below 5C. With recent mild winters this may not have happened by early December even in areas that previously had plenty of frost by this time. If the weather in late autumn is mild, it is better to postpone forcing branches until January and February. These are also the months when most pruning is done, and pruned branches are perfect for forcing indoors, and will brighten the coldest and gloomiest time of the year.

Generally the closer it is to the time of the trees’ natural flowering, the easier and quicker it is to make them flower indoors. Exposure to cold is nevertheless crucial: if the weather has been right and the exposure has been achieved, cherries cut on St Barbara’s day will flower on Christmas day. Last year I put a small branch of cherry in water on a bright windowsill on the 4th of December. The autumn was particularly mild and I knew there was little chance of it flowering. I changed the water every day, but did not do anything else, such as misting it with water. My branch opened just one flower, but it was exactly on Christmas day and looked truly miraculous.

When your area had a sufficiently long period of cold weather, cut branches with buds from early flowering trees or shrubs. These could be cherries, apples, elder, Cornelian cherry (Cornus mas), forsythia, different varieties of spirea and daphne, or Japanese maple. Choose branches that have the largest number of flower buds – these are bigger and rounder than thinner, pointier buds that produce only leaves. It is best to break off the ends of cut branches or split the ends carefully by making vertical incisions with secateurs. A common advice on forcing branches indoors is to smash the ends by hitting them with a hammer, but this can easily damage them too much and have the opposite effect of preventing them from absorbing water.

Put the branches in water in a conservatory or on a windowsill where they can get as much light as possible. The branches should be away from any direct heat sources. Change the water every day – ideally it should be slightly warm. Mist frequently with water, particularly when the growth starts, because dry air in centrally heated rooms can cause the buds to die off. Among the quickest to spring into growth indoors are daphne (after 6-8 days), Japanese maple and Cornelian cherry.