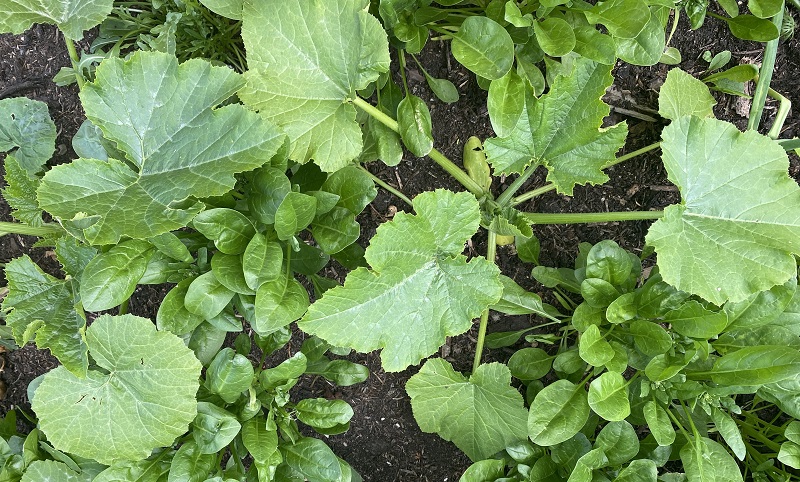 Companion planting for vegetables is used in organic gardening and farming to maintain the health of plants and the soil. It helps to avoid monoculture and the problems it creates.

Monoculture is very rare in nature, because it exhausts the soil and produces ideal conditions for the spread of pests and diseases.

What happens when a pest gets to a field planted with a single species? It finds a perfect environment to thrive and spread – plenty of food and no predators. Companion planting helps to avoid this.

In addition, when mixed planting is used, it is possible to grow the same vegetables in the same space for several years. This is impossible in monoculture without the loss of soil fertility and the growth of pests and diseases.

How plants influence one another

Plants influence one another in several ways:

1. They excrete chemicals from their leaves and roots. Chemicals produced by leaves include airborne substances and substances that are washed off by the rain and absorbed into the soil.

Chemicals excreted from the roots are very variable and include many growth stimulants. All substances are absorbed by other plants and can have a strong positive or negative influence on them.

2. Plants protect one another. Chemicals produced by their roots and leaves can suppress diseases or deter insects.

Many insects use smell to locate their food. They find some strong smells unpleasant. Strong smells can also confuse insects by masking the scent of their food.

3. Plants establish a special microclimate. Tall species create shade and humidity for lower levels in a plant community, and so help to preserve moisture in the soil. Vegetables, such as spinach and lettuce, need this because they don’t like hot and dry conditions.

4. Plants alter the chemical composition and structure of the soil and thus prepare it for the following crop. This is one of the reasons for the use of green manures.

The benefits of companion planting

In companion planting one species is usually has a role of the main crop, and another of a supporting crop. A supporting companion performs the following functions:

A companion plant can also function as an additional crop. While the main crop remains small, the space is given to compact, but fast-growing vegetables. They are harvested in time for the main crop to take over the space.

A list of companion plants for vegetables: improving taste and fertility

Aromatic herbs are good companions for almost all vegetables. Such herbs include lavender, sage, hyssop, parsley, dill, thyme, oregano, chamomile and chervil. They make vegetables not only healthier, but also more tasty. For example, basil improves the taste of tomatoes, and dill – the taste of cabbage.

Dandelion emits a large amount of ethylene, a gas that speeds up the ripening of fruit and is used commercially for this purpose. It is therefore a good companion for apples and other fruit trees, as well as for many other vegetables, including tomatoes.

Dandelion is also attractive to bees that collect its nectar and pollen. When they visit the garden, they also pollinate fruit trees, gooseberries and currants that flower at the same time.

Bean family includes different varieties of beans and peas, common vetch, hairy vetch, lucerne, lupin and clover. Plants of this family enrich the soil with nitrogen. They have a symbiotic relationship with bacteria that inhabit their roots and fixes nitrogen from the atmosphere, making it available to plants. As a result they provide nitrogen not only for themselves but also for other plants that grow nearby.

Dwarf (rather than climbing) beans are commonly used as companions that enrich the soil for other vegetables.

Radish is a good companion to dwarf beans. When it is planted with them, it becomes larger and tastier, and is rarely attacked by pests. Radish is planted two weeks earlier than beans, both because it is more hardy and to ensure that its seedlings are not overwhelmed by strong-growing beans.

Spinach is a good companion plant for most vegetables. Its roots emit saponins that encrease absorption of nutrients from the soil. Therefore potatoes, tomatoes, beans and beetroot grow well next to spinach.

Weeds have a role in maintaining the soil fertility. It is counterproductive to try to get rid of the completely. A better strategy is to keep them within limits. Research has shown that the presence of some weeds improves taste and productivity of crops.

It is recommended to create a permanent ground cover in fruit orchards that includes wild members of the bean family, such as the white clover, lucerne, vetches and lupin. They enrich the soil with nitrogen and reduce the incidence of disease and pests.

A list of companion plants for vegetables: pest control

As mentioned already, plants with a strong smell can repel and confuse insects. They therefore protect other plants. If you plant a strongly-scented herb or vegetable next to another vegetable, it will make it less attractive to insects. The same can be achieved by spraying vegetables with an infusion of strongly scented plants.

In companion planting for vegetables aromatic herbs should be planted so that they don’t overwhelm the main crop. They can grow around the edges of beds and sparsely on the bed itself.

Sage or thyme, planted next to cabbage mask its smell and protect it from flea beetles and cabbage moth.

Basil and beans, garlic and roses

In the same way it is recommended to plant basil next to beans and garlic next to roses to protect them from greenfly.

It is recommended to sow borage between the rows of all varieties of cabbage. It reduces the damage from caterpillars.

Dill sown next to cabbage repels greenfly, blackfly and whitefly.

Some vegetables themselves have a strong smell. If cabbage is planted with celery, it will be protected from flea beetles and the cabbage white butterfly.

Marigolds and mustard repel some species of nematodes.

Greenfly, blackfly and whitefly don’t like the smell of most aromatic herbs, as well as the smell of onion, garlic, mustard, marigolds, coriander, fennel, dill, catmint and nasturtium.

All plants below are compatible and benefit from being grown together. They can be planted in the same place for several years without loss of productivity.

On a bed 1m wide plant two rows of early potatoes at a distance of 50 cm from each other. Between them plant one row of cauliflower, kohlrabi or another cabbage. On the edges and between the rows of potatoes and cabbage plant the rows of spinach.

Members of the cabbage family suppress fungal diseases that damage potatoes, such as potato blight, and pests, such as wireworms.

On a bed 1m wide plant two rows of early potatoes at a distance of 50 cm from each other. On the edges plant radish and garden cress. Between the rows of potatoes plant kohlrabi (or another cabbage), chervil and lettuce.

Alternate the rows of lettuce and radish. This will protect radish from the flea beetle.

Poor compatibility is usually a result of allelopathic activity – chemicals produced by the leaves and roots of plants. Such chemicals can suppress the growth of some plants. For example, the following vegetbles are INCOMPATIBLE:

fennel is incompatible with tomatoes, beans, peas and spinach.

Posts related to ‘Companion Planting for Vegetables in an Organic Garden’

Pin ‘Companion Planting for Vegetables in an Organic Garden’ for later