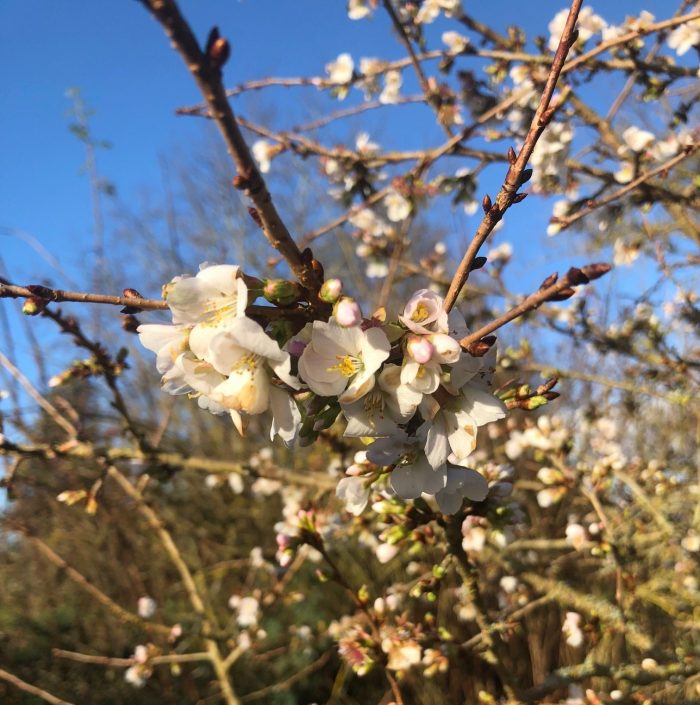 When we think of a Christmas tree we usually imagine it to be a conifer – a fir, a spruce or a pine. And indeed there is a long tradition, going back to the Middle Ages, of decorating confers for Christmas. Conifers, however, are not the only trees that had this role. Other evergreens were also used, originally presumably in pre-Christian winter solstice celebrations and later also at Christmas. Yew, for example, was probably sacred to peoples of northern Europe. Its longevity defies imagination – it can live for up to two thousand years. Like many poisonous plants it has a long history of use in medicine. Cuttings of yew trees are still sold to pharmaceutical companies for the production of an important anti-cancer drug.

Yew is often planted in churchyards in Britain and northern France, and there was a tradition of decorating it for Christmas. English poet Samuel Taylor Coleridge described, in a letter dated to 1798, Christmas celebrations in a German home he visited. He writes that on Christmas Eve an exchange of presents between parents and children took place in a parlour where a great yew bow was fastened to the table, and decorated with tapers and coloured paper ornaments that hang from its twigs. There are other references to the use of yew in Christmas celebrations, though its relative rarity, slow growth and poisonous foliage meant that it never became a common Christmas tree.

Boxwood was also used as a Christmas tree. The ease with which it can be trained into different shapes made it an attractive choice, and there is a record that boxwood trees decorated with golden nuts was offered for sale at a Christmas market in Berlin in 1800. Another much loved evergreen symbol of Christmas is holly.

An American writer Washington Irving (1783 – 1859) describes traditional celebrations of Christmas that he observed while staying in England. In Old Christmas he mentions country housewives decorating windows of their houses with ‘glossy branches of holly, with their bright red berries’, and family portraits adorned with holly and ivy in a wealthy manor. Describing a Christmas Eve supper in a country manor house he writes: ‘Beside the accustomed lights, two great wax tapers, called Christmas candles, wreathed with greens, were placed on a highly polished buffet among the family plate’.

Evergreen plants may have symbolized the continuing presence of life at the coldest and darkest time of the year, and their ritual use is therefore not surprising. There was, however, another, even more interesting custom in Europe of using as a Christmas tree a flowering cherry. It is attested particularly in Bavaria, but also elsewhere in Germany, where it was common to plant a cherry tree in a large pot and bring it indoors in late autumn, so that it could blossom at Christmas.

References to this tradition occur already in the Middle Ages, and it seems to have been a common custom in the late 18th and early 19th centuries. One testimony comes from an autobiography of Albrecht Adam, a well-known painter of battle scenes who was an official artist in Napoleon’s army, and accompanied it on the expedition to Russia, leaving an important pictorial record of the campaign. Adam was born in 1786 in Nördlingen in Bavaria and described in his Selbstbiographie how Christmas was celebrated in his town. He reports that it was not a ‘dark fir tree’ that was in use on Christmas Eve, but a cherry tree, planted in a large pot. Such trees were usually in full bloom at Christmas, rising to the ceiling of rooms where they stood, and presenting an amazingly beautiful sight. Families tried to outdo each other to have the finest tree, and a cherry covered in blossom became the pride of an entire household. Blossoming cherries were decorated with candles and other ornaments, and one can only image what a lovely sight in must have been.

This tradition was almost certainly influenced by a legend that existed in several European countries. There was a belief that trees blossom on the night between the 24th and 25th of December. There are different versions of this legend. Some claim that trees in the forests stand in full bloom, while other ascribe this miraculous property to individual sacred trees. In Germany and England stories about trees blossoming at Christmas circulated since the late Middle Ages.

A theologian Johannes Nider, for example, tells around 1430 about a miracle in the neighbourhood of Nürnberg. He reports that ‘Not far from Nürnberg there stood a miraculous tree … Every year in the wildest and most disagreeable time of the year, invariably and only on the night of Christ’s birth … it bore blooming apples the size of a thumb … Therefore every year, trustworthy people go there from Nürnberg and the neighbouring regions, and keep watch all night at that place to test the truth of the thing. A tree similar to this one in every respect is found in the diocese of Bamberg’ (F. A. Reuss, ‘Kleine Beitraege’, Jahresbericht für den historischen Verein für Mittelfranken, 1859, p. 95, cited from Yule and Christmas, p. 172).

In England the legend took a somewhat different form. It was linked to the story of Joseph of Arimathea, a wealthy man and a disciple of Christ, who buried Christ’s body after the crucifixion, according to the gospels. There was a medieval legend about Joseph’s arrival to England, first told by the historian William of Malmesbury (c. 1095 – c. 1143) in his De Antiquitate Glastoniensis Ecclesiae (‘On the History of the Church of Glastonbury’). According to this legend, Joseph of Arimathea came to England after Christ’s death and settled in Glastonbury. He was believed to have been buried in Glastonbury and was venerated there as a saint. The legend also claimed that he brought with him a walking stick which he planted in his new home in Glastonbury. It sprouted and started to blossom every year on Christmas Eve.

The miraculous tree became known as the Glastonbury Thorn. It was a form of the common hawthorn, known as Crataegus monogyna ‘Biflora’. Unlike an ordinary hawthorn it flowers twice a year, producing an early small crop of white flowers in winter, as long as the weather is not too cold, and then flowering again more prolifically in spring (hence the name biflora – ‘double-flowered’). It is still possible to buy it and grow in one’s garden. It is apparently just as hardy and easy to cultivate as the common hawthorn. The original tree that was venerated in Glastonbury in the Middle Ages, and believed to have sprouted from Joseph’s walking stick, unfortunately did not survive: it was sadly cut down and burned during the English Civil War. Other specimens of the ‘holy thorn’, however, were known to grow elsewhere, and some were believed to have been propagated from the original Thorn.

When the Gregorian calendar, a result of a calendar reform that took place in 1582, was officially adopted in Britain in 1752, Christmas started to be celebrated twelve days earlier than previously – the ‘old Christmas day’ fell in the 18th century on the 5th of January. There are records of people having doubts about the new style Christmas, among other things because the sacred thorns continued to flower as before. According to the Gentleman’s Magazine for 1753, ‘Glastonbury. A vast concourse of people attended the noted thorns on Christmas Eve, New Style; but, to their great disappointment, there was no appearance of its blowing, which made them watch it narrowly the 5th of Jan., the Christmas day, Old Style, when it blowed as usual’ (Yule and Christmas, p. 174).

The legend that trees blossom on Christmas day is reflected in yet another custom – of Christmas cherry branches or St Barbara flowers. This lovely tradition is the one to try for those of us who don’t have the energy, skills or space necessary to grow one’s own Glastonbury Thorn or a cherry tree in a pot in winter.