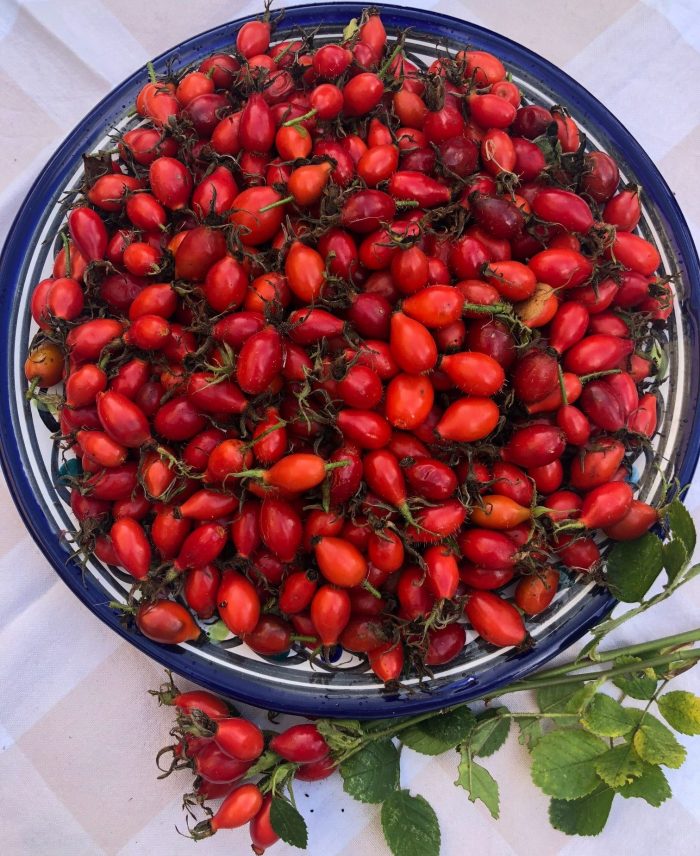 Rosehips are some of the most beautiful and nutritious wild berries. They resemble jewels due to their elegant oval shape, bright colour and glossy skin. Rosehips have many culinary uses – there are recipes for jam, jelly, purée and wine. Perhaps the simplest and most delicious way to enjoy them is in rosehip tea, made from fresh or dried berries.

Tea is probably also the most beneficial way of using rosehips. It can be made without boiling, and therefore preserves the berries’ vitamin content as much as possible.

Rosehips are highly nutritious. Amazingly they have the greatest concentration of vitamin C of all fruit and vegetables (Koczka, et. al., 2018). It is typically 0.3-4% of their weight (Bhave, et al., 2017). This is considerably more, by at least the factor of 10, than the amount contained in other vitamin C ‘heroes’, such as lemon, orange or blackcurrant. There is simply no other natural product that contains vitamin C in such a high concentration.

Rosehips have many other biologically active compounds, vitamins and minerals as well, including iron. They are particularly rich in carotene – its concentration is almost as hight as that of vitamin C.

Because of their vitamin content, rosehips can strengthen immunity and make those who eat them regularly less susceptible to colds. They can also help the body to fight infection and recover from colds more easily.

Rosehips have other medicinal properties as well. For example, they reduce inflammation and lower blood pressure.

Regard for rosehips in traditional medicine

Wild rose was held in a very high esteem in traditional medicine. This is evident in its prominence in medieval and Renaissance medical treatises. Thus, John Gaddesden, one of the most celebrated medical authorities of his day, named his treatise on medicine, Rosa Anglica. He was a fellow at Merton College, Oxford, and a physician of King Edward III. He wrote Rosa Anglica between 1304 and 1317.

When and how to collect rosehips

Wild roses are very common and grow in hedgerows, around riverbanks, on hillsides and in light deciduous woodland. They prefer a sunny position. They flower beautifully in late May and June, and their petals also have many culinary uses, including in jam and tea.

Rosehips ripen in late August and September, and the best time to collect them is in September and early October. They often stay on plants until late autumn and even winter, but their quality declines. When they are overripe, they darken and disintegrate.

How to dry rosehips

Rosehips can be dried in a dehydrator at a temperature 70-80C.

It is also possible to dry rosehips naturally, without heat. Simply put them on paper in a dry, moderately warm room. Make sure that they are not exposed to the sun, that tends to bleach their colour and destroy nutrients. In such conditions the berries will dry perfectly well, but it is not a quick process: depending on humidity and temperature it will take 3-5 weeks.

This last method is the one I prefer and use every year in autumn, because it ensures that vitamin C in rosehips is preserved as much as possible.

If you use heat, such as in a dehydrator or oven, it is important not to burn the berries. Though burnt rosehips are used as an alternative to coffee, this reduces their vitamin C content.

Dried fruit has a brown-reddish colour. Keep it is a dark dry place for up to 2 years.

How to make rosehip tea

Rosehip tea can be made from both fresh and dry berries. To make tea crash fresh berries in a mortar or in a food processor. Dried berries are best ground in a coffee grinder.

There are several ways of making rosehip tea.

Use 1 tablespoon of crashed or ground berries to one or two glasses of water. Put berries in a pan, add water, bring to boil and boil for 10 minutes covered. Leave to infuse for at least 1.5-2 hours or more, up to 20-24 hours for a really strong flavour. The infusion can be heated before drinking.

This method produces a strongly flavoured tea, but boiling is not ideal, because it destroys vitamin C.

Rosehip tea made without boiling

Tea can be made without boiling, particularly from finely ground dried berries. Use 1-2 glasses of water to 1 tablespoon of ground fruit

Rosehip tea in a flask

For a stronger flavour use a flask, instead of a teapot and leave to infuse for 1.5-2 hours. The longer the time, the stronger will be the taste of the tea.

Before drinking put the tea through a fine strainer to filter out rosehip pulp and seeds. Berries have tiny hairs inside around the seeds that can be quite prickly, so it is important to filter them out.

Rosehip tea tastes fruity and slightly lemony. It is similar to hibiscus tea, but less sour.

Rosehip tea has a reddish colour and is a wonderfully warming drink in cold weather. It combines well with spices, lemon and honey, as can be seen from the recipes below.

Put berries and tea in a warmed teapot. Add boiling water. Close the lid, leave to infuse for 2-3 minutes and serve.

This is a warming and nutritious drink, particularly great if you are fighting a cold.

2. Put ginger and rosehips in a warmed teapot.

5. Poor in teacups. Add a slice of lemon and a teaspoon of honey to each cup before serving.

Another wonderful recipe for anyone fighting a cold or just wanting a warming drink that evokes summer.

1. Put rosehips, raspberries and lime flowers in a warmed teapot.

3. Close the lid and leave to infuse for 10 minutes.

5. Poor in teacups and add a teaspoon of honey to each before serving.

Studies of the nutritional value of rosehips

Studies of the nutritional value of rosehips referred to in this post are:

Image credits: Rosehips in a jar by Julie