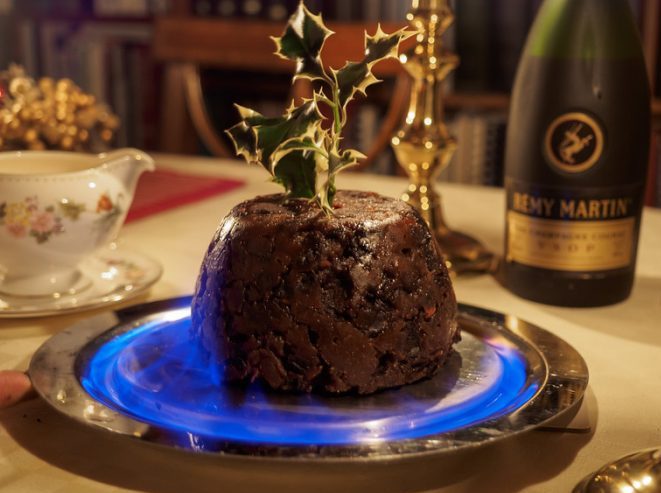 What is largely forgotten today is that Christmas feasting was preceded by a fast. Advent was the time of penance and abstinence, when most animal foods were prohibited not only to religious orders –  monks, nuns and priests –  but to laity as well.

We should not take fast too literally though. Even those who followed exactly the dietary rules set by the Church, could eat very well if they wanted to and could afford it. Alexander Murray in his article ‘Medieval Christmas’ observes that an anonymous 15th-century poem, describing a knight’s Advent meal, reports that it included ‘several soups or stews, two helpings of each’, and then ‘various sorts of fish: baked in bread; grilled; boiled; stewed and spiced; and all with sauce’. After this the waiters offered him wine.

Fish was allowed on many days during a fast, and so as long as the knight’s soups and stews did not contain any meat, butter or milk products, he did not formally break any rules, even though his meal can hardly be described as penitential in spirit.

On Christmas day all restrictions were lifted and for the wealthy at least, abundant feasting could commence. As we know from the account books, at a royal Christmas feast in London in 1377, under king Richard II, twenty eight oxen and three hundred sheep were eaten.

A popular centerpiece was a boar’s head. It was decorated with bay leaves and rosemary, and served on a huge platter that was ceremoniously brought in by two servants.

Turkey did not arrive to Europe until the 16th century as it is a North American species. Already then, however, it came to be seen as a special Christmas dish, even though boar’s head was still preferred due to the impact it created at a feast.

Birds other than turkey are mentioned in medieval and early modern recipes frequently and in large quantities. Even when turkey became a staple of Christmas meal in the 19th century, chicken and goose also featured as less expensive options.

Goose is what poor Bob Cratchit and his family are able to have on Christmas Eve in Charles Dickens’s A Christmas Carol. That is of course until a reformed Ebenezer Scrooge shows kindness and sends them an enormous turkey.

Goose is described by Dickens as cheap, and the only accompaniments Cratchit’s family are able to have with it are gravy, stuffing (made with onion and sage), apple sauce and mashed potato. Their meal ends with a Christmas pudding, made by Mrs Cratchit, looking ‘like a speckled cannon-ball’, decorated with a holly spring on top, soaked in brandy and set alight.

Following this Cratchits sit around the fire, with apples and oranges on the table, and ‘a shovel-full of chestnuts on the fire’, and drink to Christmas a hot brew made by Bob and said to include gin and lemon.

Christmas pudding is now one of the most standard components of a Christmas meal in Britain, but at least in its present form it is a 19th-century tradition. Originally a plum pudding included chopped meat and suet. It also contained prunes, raisins, currants and sometimes other dried fruit, as well as cinnamon and cloves.

It was eaten as an accompaniment to a beef main course, and beef was normal celebratory meet. As the pudding evolved, meat and suet content was reduced, and then entirely abandoned. It became a sweet course and a standard part of a Christmas meal by the mid 19th century, almost certainly under the influence of Dickens.

A wide adoption of the Christmas pudding after its transformation into a desert is not at all unusual. Many other Christmas dishes, though inspired by the Middle Ages, actually date from the late 18th and early 19th centuries.

Romanticism, a school that dominated the arts during this period, had a particular fondness for medieval aesthetic. This is visible in the Gothic revival in architecture exemplified, for example, by the Houses of Parliament in London. Medieval themes are also common in the work of Pre-Raphaelite artists who were active in the middle and the second half of the 19th century.

A similar nostalgia for the customs and values of pre-industrial age can be seen in the Christmas traditions and food of Victorian England. They also evoke the medieval taste and esthetic. Spices, often brought to Europe from far away, including cinnamon, cardamom, nutmeg and cloves, were essential ingredients of surprisingly cosmopolitan cuisine of the medieval upper classes. They were used not because meat was poor quality, but because they were seen as luxury and were therefore highly desirable.

Equally traditional were sugar, honey, and dried and glazed fruit. All these ingredients became a trademark of Victorian Christmas dishes and are still used in Christmas deserts today.

Marzipan, made with sugar, honey and ground almonds, is a genuinely medieval sweet.

Another genuinely medieval desert is German stollen. Unlike many other Christmas foods, it can be tracked back to 1329. The recipe, however, must have been quite different.

Stollen was originally Advent food and, as mentioned already, Advent was a period of fasting in medieval Europe. Stollen was therefore made with only vegan ingredients. Medieval stollen seems to have been an oat cake, made with water and rape-seed oil, as well as spices, dried fruit and sugar. It was shaped to resemble the infant Jesus in swaddling clothes.

In France the most distinctive Christmas food tradition is réveillon, a festive meal on Christmas Eve. Since traditionally it was a time of fasting, oysters and shellfish were and still are an essential part of this meal.

Undoubtedly the best known French Christmas dish is bûche de Noёl, a roulade cake covered with chocolate and made to look like a Yule log. This lovely desert became adopted all over the world, but it is very recent: it originated after the Second World War.

Christmas food traditions in Britain and the United States

Christmas food traditions are very set in Britain. There is a strong expectation that a Christmas lunch would include turkey and a selection of vegetable dishes and accompaniments, such as roast potatoes, Brussels sprouts, sage and onion stuffing and bread sauce. There is also an expectation that a meal will end with a Christmas pudding. Alternatives do exist, and both chefs and families rebel against this tradition, but at the same time very many people enjoy medieval-Victorian Christmas.

In the USA there is much more variety. A modern American Christmas meal draws on a range of different national traditions, and can include a French-inspired bûche de Noёl, as well as a Dickens-inspired Christmas pudding, and many other festive dishes.

But going back to the 16th century, below is a description of good Christmas country fare given by Thomas Tusser. He published a manual of husbandry in verse in 1573 under a title Five Hundred Points of Good Husbandry.

He strongly advocates generous hospitality and charity at Christmas and is extremely keen on ‘mirth and good cheer’. He seems to suggest that home-raised meat and poultry, home-grown native fruit, home-brewed drink, and abundant, but simple home-made food is what we need at Christmas. They are amply sufficient and will not ruin a ‘good husbandman’ financially:

Things handsome to have, as they ought to be had.

Thee both do provide, against Christmas do come,

To welcome good neighbour, good cheer to have some.

Good bread and good drink, a good fire in the hall,

Beef, mutton, and pork, shred pies of the best,

As then in the country is counted good cheer.

What cost to good husband is any of this?

Good household provision only it is:

Of other the like, I do leave out a many

That costeth the husbandman never a penny.

Christmas food is lovely – it is a unique opportunity for us to experience the flavours of past times, even if only in a form adapted to modern tastes. Whatever you are eating at Christmas, I very much hope that it is delicious, abundant and memorable!