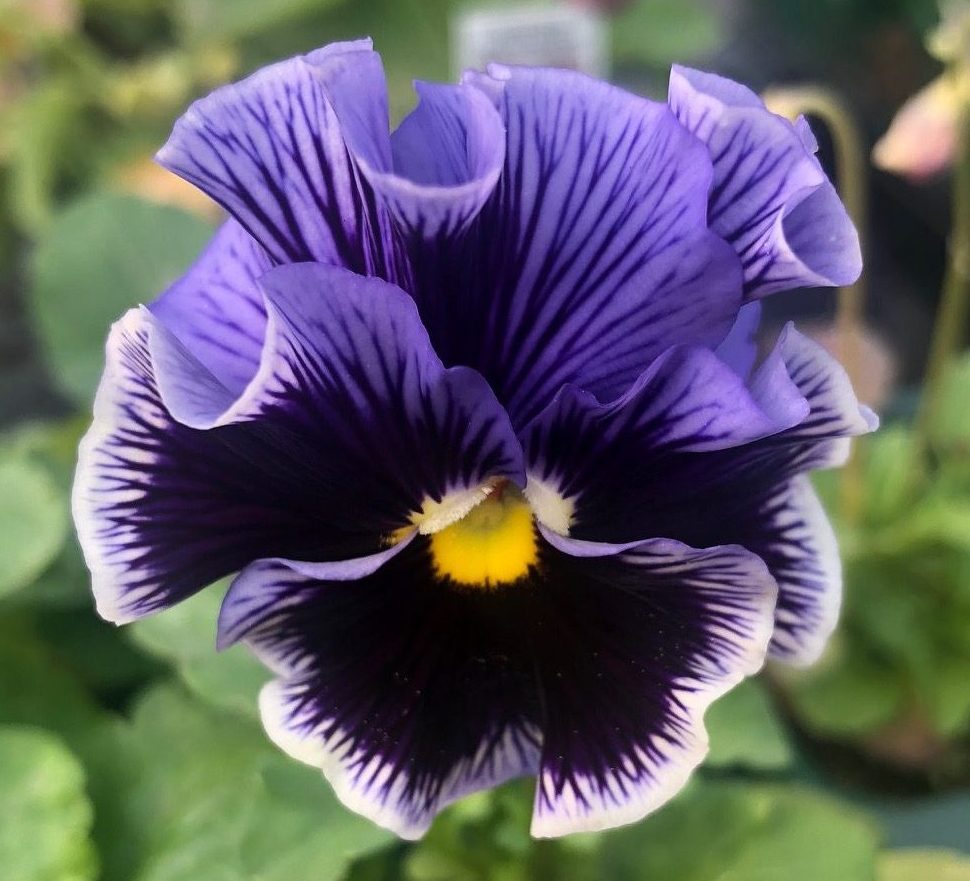 Pansies (Viola wittrockiana) fully deserve their popularity as decorative plants. They are easy to grow, beautiful and come in a great variety of colours, sizes and shapes. Breeders have achieved a real perfection, particularly with large-flowered varieties, that can be strikingly beautiful.

The history of pansies, however, goes back to the time when modern varieties did not yet exist, and only their wild ancestor, Viola tricolor, was grown. The name ‘tricolor’ is not difficult to explain. The flowers of wild pansy consist of five petals in three main colours: white, yellow and purple. It was a native of Europe and Asia, brought to America by European settlers.

Wild pansy was used as a medicinal and edible plant since antiquity. In the Middle Ages it was grown in gardens, added to salads, crystallized for decorating deserts, and used in medicine and cosmetics.

The symbolism and meaning of pansy: love, faith and clarity of thought

Pansy figures in many Renaissance and Victorian literary works. Some of its popular names, such as ‘heart’s ease’ and ‘love-in-idleness’, suggest associations with love and magic. In A Midsummer Night’s Dream Shakespeare gives a recipe for making people to fall in love:

And maidens call it love-in-idleness…

The juice of it on sleeping eyelids laid

Will make a man or woman madly dote

Upon the next live creature that it sees (Act 2, Scene 1).

Heart’s ease became a religious symbol as well. In old herbals it is given the name Herba Trinitatis (‘Herb of the Trinity’), inspired by the three colours combined in its flower.

The English name ‘pansy’ derives from the French pensée, meaning ‘thought’. It reflects pansy’s long association with reasoning and contemplation.

When French king Louis XV ennobled his physician, François Quesnay, he gave him a coat of arms that included three pansies and a Latin motto Propter cogitationem mentis, meaning ‘Due to the reasoning of the mind’.

Quesnay, best known for his foundational work in economic theory, was highly esteemed by the king because he cured his son, the heir to the throne, of smallpox. Louis XV valued Quesnay’s learning and called him mon penseur (‘my thinker’).

The same traditional associations with contemplation are evoked in Shakespeare’s Hamlet where Ophelia says that pansies are for ‘clarity of thought’.

19th-century growers: the Father and Mother of modern pansies

Pansies grown before the 19th century were little different form the wild Viola tricolor. A breakthrough happened in the early 19th century in England. The ‘father’ of the modern pansies was William Thompson, gardener of Lord Gambier, who lived at Iver near Uxbridge.

From 1814 Thompson systematically carried on selection work on pansies for 30 years. By around 1830 he secured blotches, the dark markings of the three lower petals, that became a trademark of pansies.

William Cuthbertson in Pansies, Violas and Violets (1910) cites Thompson writing that blotches had never been seen until one day he accidentally came across a flower that looked like ‘a miniature cat’s face steadfastly gazing’ at him. This variety, that Thompson named ‘Madora’, later produced a further improved cultivar ‘Victoria’ that became widely grown in Europe.

Pansies also had a mother: Mary Elizabeth Bennet. Cuthbertson reports that in Glenny’s Garden Almanack for 1885, George J. Henderson stated that about the year 1812 there lived in Walton-on-Thames a daughter of the Earl of Tankerville.

Her favourite flower was the common pansy and she cultivated it over a large portion of her garden. By selecting seeds from the best specimens every year, she obtained varieties with remarkably fine flowers.

It appears, therefore, that two growers turned their attention almost simultaneously to the improvement of the wild pansy.

Achievements of modern growers of pansies

The breeding of pansies continued in England, Scotland and France, and later in the USA, Germany and Japan.

The contribution of Scottish growers was particularly outstanding – as a cool climate plant, pansy flourished in the north. It was in Scotland that large-flowered varieties were first developed to perfection. By the end of the 19th century a Scottish grower Charles Stuart introduced pansies without blotches, all in a single colour.

In the USA pansies were tremendously popular in the late 19th century. Large-flowered varieties with a diameter of flowers of up to 10-12cm were cultivated in Portland, Oregon.

At present France and Germany are at the forefront of the selection of new varieties. It is to German growers that we owe orchid pansies and pansies with wavy petals.

How to grow pansies

Are pansies annual or perennial?

Pansies are perennial plants, but after 2-3 years their flowers become smaller. As a result, they are usually cultivated as annual or biannual plants.

Pansies grow well in almost any soil, but do best in fertile soil enriched with organic matter, such as compost, leafmould or well-rotted manure.

Pansies require an open sunny position – they do not flower well in shade.

Season and flowering time of pansies

Pansies are, however, cool weather plants that do best in autumn and spring. When the weather turns hot and dry, their flowers become smaller and eventually disappear until autumn.

A classic way of growing pansies

A classic way of growing pansies is to sow seeds in July. Young plants that develop from seeds are then planted in pots or beds in September or early October. They will flower in autumn until it becomes too dark and cold, but their best flowering will be in spring. Pansies are cold-tolerant and can be killed only by very hard frost.

My experience of growing pansies

Pansies look particularly effective when planted en masse. I once planted with pansies in late September a 1.5 x 1.5m square vegetable bed. They flowered until mid November. By mid-February, however, they looked very battered, particularly since it snowed that year. I was wondering whether it was worth keeping them any longer.

In March, however, they entirely recovered, and in April and early May the bed was awash with colour. The plants developed good roots in autumn and took advantage of moist soil and sunshine in early spring. By the middle of May they started to run out of steam, but I was still sorry to remove them when the time came to plant tender vegetables at the end of May.

Pansies are edible flowers. Their velvety texture, slightly sweet taste and a strong scent make them ideal for eating fresh in salads. Small-flowered varieties, that are closest to Viola tricolor, have the strongest smell.

Pansies preserve some of the outstanding medicinal properties of their wild ancestor. Several studies of the nutritional values of pansies have given them high praise. According to Rocio González-Barrio et al., pansy is an excellent source of vitamins and minerals, and shows a high antioxidant activity (‘Chemical composition of the edible flowers, pansy (Viola wittrockiana) and snapdragon (Antirrhinum majus) as new sources of bioactive compounds’, Food Chemistry 252, 2018).

Crystallization of pansies is an old technique that was used by Victorian and earlier cooks. Here is how to do it.

1. Break an egg and separate yolk and white.

2. Lightly beat the egg white with a fork.

3. Paint the pansies with a little lightly beaten egg white on the front and back of flowers, using a fine brush.

4. Sprinkle caster sugar evenly over the wet petals on both sides of the flowers.

5. Lay the flowers on a sheet of greaseproof paper and leave to dry for 2-3 hours until hard and crisp.

This is an adaptation of a recipe for lemon syllabub from the BBC Good Food. The original recipe uses lemon to flavour syllabub. But I wanted something more wild and novel, and so used sloes instead of lemon.

Sloes are perfectly ripe in October, but any other seasonal berries can be used. Raspberries or strawberries from the garden, or blackberries from a nearby hedge will all be great.

Instead of caster sugar I used raw cane sugar, which is almost as fine, since it is difficult to get organic caster sugar.

To make the purée

1. I collected a breakfast bowl of sloes from a nearby hedge and took out stones using a cherry pitter. It does not work as well with sloes as with cherries, because sloes are firmer. However, it still does the job. The pitter either knocks out the stone or dislodged it, making it quick and easy to take out.

2. I then liquidized the sloes in a blender adding 3-4 tablespoons of water.

1. Whip the cream and sugar together until soft peaks form.

2. Stir in the wine, then stir in the sloe purée. If you are not sure how much purée to add, you can always add some and serve the rest as a sauce. Diners can then add the sauce themselves to their own taste.

3. Spoon syllabub into glasses or bowls and decorate with pansies.