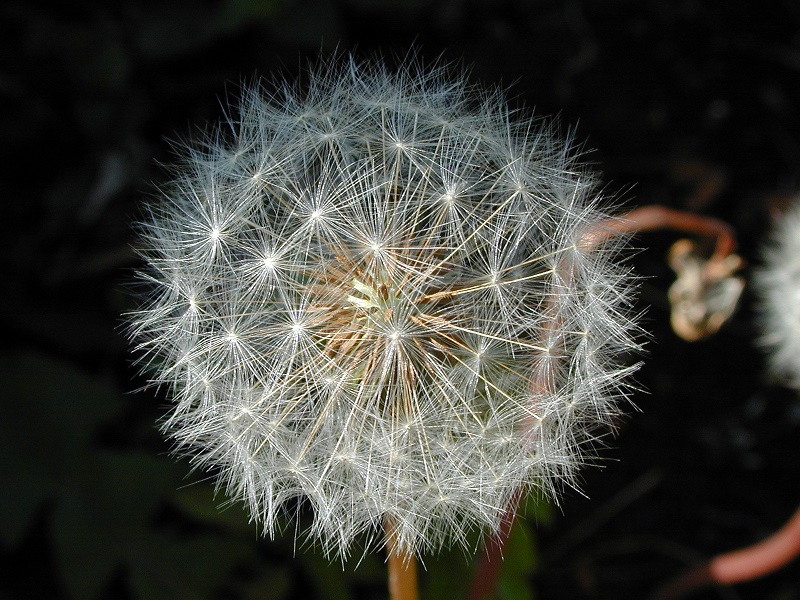 Large colonies of dandelion in early spring are a most uplifting and glorious sight. Their beauty is compelling, but it is not everything: there is a long history of using dandelion as a vegetable and in traditional medicine.

18th- and 19th-century gardening books describe how to grow dandelion as food. Its Latin name, Taraxacum officinale, emphasizes its importance in the treatment of illnesses. The name derives from the Greek taraxos ‘disorder’, akos ‘remedy’ and Latin officinale ‘of apothecary’s shop’.

The flowers of dandelion are loved by bees that visit them particularly for pollen — an essential food for their young in spring. And to make it even more useful, dandelion often flowers for the second time in September-October when very few flowers are available to insects.

A fit of nature’s engineering and a gift for all

A dandelion seed is a most perfect fit of nature’s ‘engineering’. Its ‘parachute’ can carry it long distances, and when the seed lands, the ‘parachute’ ‘drills’ it into the soil.

The ‘parachute’ then becomes a ‘tent’ that protects the seed. And as the drops of rain hit the ‘roof’ of the ‘parachute’, they hammer the seed deeper into the soil.

So well equipped, it is not surprising that dandelion can thrive almost anywhere. It is usually seen as a weed, but there are many reasons to think of it as a gift from nature. Dandelion as a vegetable is highly nutritious, requires no effort and is free for all in almost all seasons.

Dandelion in cooking now and in the past

There are many recipes for the use of dandelion as a vegetable in cooking. Modern recommendations, that appear on social media every spring, tend to focus on its flowers: dandelion wine and ‘honey’ made from its flowers are just two examples.

They also recommend bleaching the leaves by growing them in the darkness (as with chicory and rhubarb) to make them more tender and less bitter (see below how to do it).

I always add some dandelion leaves to salads, particularly since they are available in the garden from very early spring and until late autumn. They are somewhat bitter on their own, but in a salad, finely chopped with other leaves, and with a dressing added, I find that bitterness either completely disappears, or is not unpleasant. If desired, however, different methods can be used to remove bitterness from dandelion (as described below).

Collecting dandelion as a vegetable

As with all other plants, dandelion should not be collected next to roads and areas where it can absorb heavy metals, pesticides, herbicides, chemical fertilizers and other pollutants. Dandelion is particularly known for its ability to accumulate substances from its environment.

1. To remove bitterness from the leaves or buds of dandelion, submerge them in cold salty water from 30 minutes to 2 hours. The exact time depends on taste and how much bitterness you would like to preserve.

3. To remove bitterness from roots, boil them in salty water for 5-10min.

Boil basal rosettes (tops of roots with leaves) of dandelions for 5-10min in salty water. Cover them with flour or batter. Fry in a vegetable oil.

Instead of rosettes, leaves and green flower buds can be used. In this case get rid of bitterness first by pouring boiling water over them, or boiling them in salty water for 3-5min.

To make a salad, put dandelion leaves in cold salty water for 30min. Chop finely. Add a dressing made from apple vinegar, vegetable oil, and a little salt and pepper.

To make pickled dandelion rosettes, collect dandelion plants with roots in early spring when the leaves are small, about 2-5cm long. Cut off the roots leaving 2-3cm.

Wash carefully and soak is salty water for 2 hours. Discard the water, put in a jar and fill the jar with a 10% salt solution (100g of salt to 1 litre of water). Keep in the fridge.

To make dandelion ‘coffee’, wash the roots, dry, and roast in the oven until they turn brown. Pulverize in a coffee grinder. Add a teaspoon to a glass of hot water, and bring to boil.

The following method can be used to grow bleached dandelion leaves for winter salads.

1. Dig out dandelion roots in autumn.

2. Cut off the leaves close to their base at the top of the root.

3. Plant the roots densely, close to one another in a pot in light soil or compost.

4. Put the pot in storage in a dark cold place, such as a shed, cellar or garage.

5. When you want to start growing the leaves, bring the pot into a dark warm (around 20C) room and water. Soon pale leaves will start appearing and in the darkness they will grow white, tender and with very little bitterness.

6. This will continue for a fairly long time. When the growth slows down, the roots can be either discarded or replanted in the garden, and a pot with fresh roots brought in.

Posts related to ‘Dandelion as a Vegetable: a Beautiful and Useful Gift of Nature’

Growing Chicory as a Flower and Vegetable

Pin ‘Dandelion as a Vegetable: a Beautiful and Useful Gift of Nature’