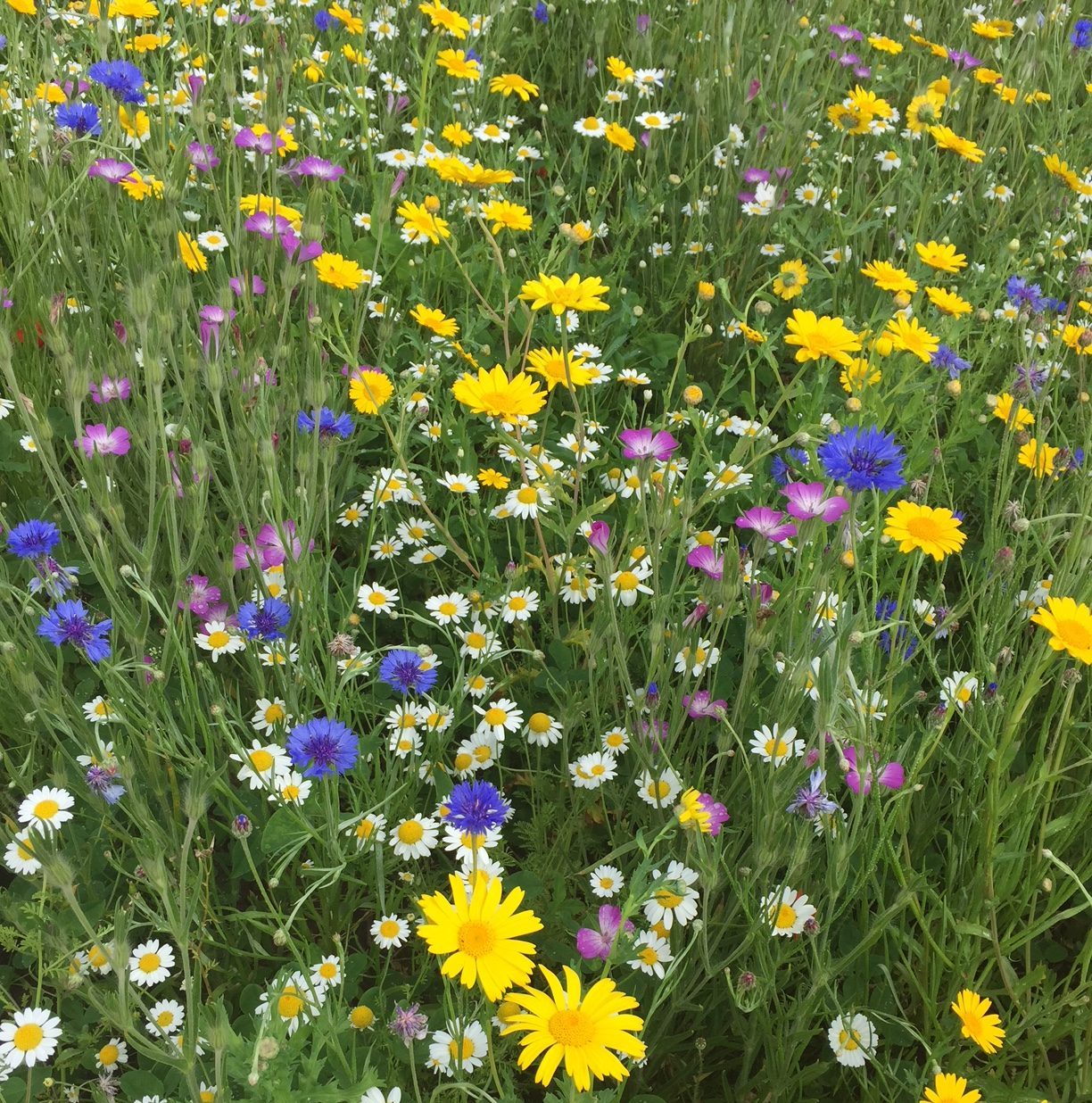 Nectar is a sweet substance secreted by plants in glands called nectaries, often, though not always, located inside the flower. It is collected and eaten by bees, flies, wasps, butterflies, moths and hummingbirds that in the process pollinate and fertilize the flower. The services that insects offer to plants must be extremely valuable, if plants are prepared to give away sugar they spend most of their life producing. In order to understand what is nectar, therefore, we need to examine why plants are happy to reward insects.

We all know that there is a dependency between flowering plants and insects. But why are insects so indispensable to plants? Of course, fruit cannot grow without pollination. But many plants are capable of self-pollination, where plant’s own pollen is used to fertilise the flower and produce fruit. Why is it insufficient?

Self-pollination is better than infertility, but cross-pollination, where different plants pollinate one another, has many advantages.

Cross-pollination then is exceptionally important and plants have dedicated helpers in this vital process. These are various insects. And by far the most important pollinators are honey bees – they are responsible for 75-80% of all insect visits to flowers.

But what attracts them to flowers? It is of course nectar.

Many flowers have eye-catching markings, such as various stripes, rows of dots and changes of colour. Most are easy to see, but some are visible only under UV light.

The markings have the role of ‘nectar guides’ – they show insects the shortest route to nectar. The markings therefore benefit both insects and flowers: they make the insect’s job easier, while at the same time assisting efficient pollination.

The chemical composition of nectar is complex and includes water, sugars, amino acids, phenols and numerous other components. The exact make-up varies from plant to plant, and this explains different qualities of honey produced by bees.

Bees generally prefer to visit a single type of flower during their flights, usually the one that is plentiful at the moment and produces more nectar. As a result the nectar of one flower often dominates in honey. When honey is sold, it is labelled according to the flower that provided the dominant nectar, such as heather honey or sunflower honey.

The quantity in which nectar is produced differs from plant to plant. There is a very large number of nectar-producing plants, but some are more prolific and therefore important for beekeeping. Plants that are exceptionally rich in nectar include linden tree, maple, phacelia, buckwheat, sunflower, raspberry, heather, willow bay herb, borage and white clover.

There are also plants, that produce only a small quantity of nectar. Buttercups, for example, that brighten meadows in late May and June, are only rarely visited by bees.

In addition, there are plants that have flowers where nectar is hidden so deep, that it is inaccessible to honey bees. It provides food for insects that have longer tongues, such as bumble bees and butterflies. Such flowers include lilac, lemon balm and red clover.

And finally there are plants that to do not produce nectar. These are the plants that are pollinated by wind. They include hazel, poplar, and many grasses and cereals, such as wheat and barley. Flowers pollinated by wind are usually small, green and inconspicuous. They also tend to have little or no smell. They are nevertheless highly important for pollinators who collect their protein-rich pollen to feed their young.

Many factors influence how much nectar plants produce, including weather, season, the time of day, the age of a plant, light, soil and other.

Flowers produce considerably more nectar at certain times of the day, often before midday, though this can vary. Thus, flowers that bloom at night and are pollinated by moths increase their nectar production in the evening.

Generally, however, plants make more nectar as temperature rises, but only up to a certain limit, usually up to 25-30C. If the temperature is higher than this, nectar production declines and it dries out. In intense heat most plants cannot produce nectar.

The most beneficial temperature for nectar production in a temperate climate is therefore 16-25C. This is when the quantity of nectar, and the quantity of sugar in it, is 2-3 times higher than at temperatures below or above this range.

Dry weather suppresses the production of nectar and droughts are extremely damaging to pollinators. In such conditions the nectar flow can stop completely: wilted plants simply cannot produce any liquid and the main component of nectar is water.

In drought bees can die of hunger, and this happens in regions where droughts are common, such as parts of Australia and the USA.

Whereas in warm and somewhat humid weather nectar production is at its highest – the ideal humidity is 60-80%. On a grey warm day nectar constantly flows out of the flowers of a linden tree, like water out of a fountain. It is easy to see – it glistens and can be mistaken for dew.

Prolonged wet weather, however, slows down the development of flowers and washes the nectar off. This is one of the reasons why many flowers close their petals in wet weather and in the evening. They protect nectar and pollen from rain, dew, wind and cold.

One of the great advantages of raspberry for pollinators is that its flowers look downwards and as a result continue to provide nectar even after a strong rain. Raspberry is generally very rich in nectar and is therefore a brilliant plant for a bee-friendly garden.

Wind is always bad for nectar, weather cold or hot. In windy weather plants’ nectaries contract and stop producing. When the wind is strong, nectar production drops 1.5-3 times and may stop completely. Particularly affected are the plants with open flowers, such as again the linden tree.

Some plants produce nectar only under direct sunlight. Light is generally important – it speeds up most chemical reactions and consequently biological processes in plants. Unsurprisingly it also stimulates the development of flowers. In shade their colour is paler and they are smaller, and their nectaries are smaller as well.

This is one of the reasons why plants growing at high altitudes, where sunlight is more intense, produce more nectar. It is true even of the same plant grown at different altitudes.

This is also one of the reasons why many towns and villages situated at high altitude, for example in French and Italian Alps, are famous for their beekeeping and honey production.

Plants produce less nectar towards the end of the summer because of lower light levels, even if they are still flowering. Gardeners and beekeepers are therefore advised to sow sunflowers, phacelia and other nectar-rich annuals late, so that their flowering starts later and compensates somewhat for the end-of-summer decline in the production of nectar.

Plants produce less nectar towards the end of their flowering. They also stop making it completely soon after the flower has been pollinated. Once this has happened, sugar produced by plants is used for the growth of fruit. At this point the flower often changes its colour to tell the insects that their services are no longer required.

A good weather for nectar production is therefore warm and sunny weather following light rain; warm and quiet nights; or higher temperatures accompanied by some light cloud and humidity.

Warm and moderately humid summer is best for bees and other pollinators, whereas hot and dry spring, followed by a wet and cold summer is destructive.

Such adverse weather, however, may become more common as a result of climate change. If this happens, pollinators of currently temperate zones may decline, possibly dramatically.

Areas that are ideal for pollinators are those where vegetation is as diverse, as possible. In such places nectar is available continuously because plants flower at different times and in succession.

Places good for nectar production and pollinators are therefore those that have a wide range of wild, as well as agricultural and decorative plants. Such an environment would provide an even supply of nectar and for a long time.

Ideally such an area should have different habitats, including woods, meadows, rivers, wetland, as well as agricultural fields and gardens, managed without harmful chemicals. Woods are rich in nectar, but only if they have a variety of trees, shrubs and other plants, rather than a monoculture.

Nectar rich agricultural and plants include fruit trees, currants, gooseberries and strawberries, cucumbers and pumpkins, oilseed rape, clover, sunflowers, mustard and buckwheat. Whereas nectar rich decorative plants include buddleja, solidago and cosmos and many others.

Generally the plants that produce most nectar are those native to the region, that are well adapted to local climate.

Such diversity can also mitigate the effects of bad weather. If the flowering of one species is disrupted by rain or cold, bees and wild pollinators will not be badly affected as long as this is followed by the flowering of other plants.

Snowdrops, crocuses and other spring bulbs, as well as primulas, are usually the first to flower. They are followed by blackthorn and dandelions in April, and cherries and apples in May. Raspberry, chicory, willow bay herb, mint and oregano flower in July and August, heather blooms in September, and blackberry and clovers through much of the summer. Even if one is affected by rain, wind or heat, another will come to rescue.

Posts related to ‘What is Nectar: Basics for a Bee-Lover’

Lemon Balm or Melissa – What does it Do for Bees?

Pin ‘What is Nectar: Basics for a Bee-Lover’ for later