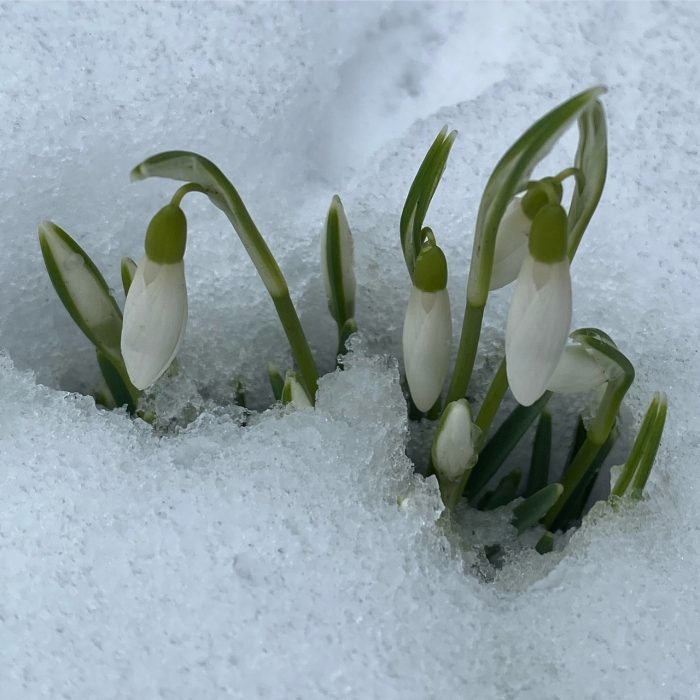 Late frosts can damage fruit trees and other plants. It is shocking that a single night of frost can wipe out the entire harvest of a carefully looked after orchard. Frost damage is devastating, as it can destroy the results of many months of hard work.

Frosts tend to be local, though sometimes they affect entire agricultural regions. They are particularly dangerous when the plants are flowering or are about to flower. This is because the flower is the most sensitive part of a plant. Fruit tree flowers can get damaged and die if the temperature falls even slightly below zero. And if it drops to -2C, it will destroy any hope of trees producing fruit.

So what advice can be given in such circumstances?

Smoke as protection from frost

A traditional method that was most commonly used in the past to protect orchards from frost was to burn fires between fruit trees or vines to coat them in smoke. This method is still used by commercial growers.

Smoke prevents heat escaping from the surface of the earth. Its effect is similar, though on a much smaller scale, to the effect of clouds.

It is for a reason that frosts happen almost exclusively when the sky is clear. Clouds reduce the difference between day time and night time temperatures. And smoke in its turn imitates the sheltering effect of clouds.

Fires are used to by wine makers in France and Switzerland to protect vineyards from frost. If you have not seen videos of this happening, look for them on YouTube. They are definitely worth watching. Fires burning at night, symmetrically positioned between the rows of vines, are a fascinating and dramatic sight. Here is one example.

How fires were traditionally used to protect orchards

Using smoke is, of course, an extreme measure, unsuitable for populated areas, and requiring great caution. If, however, you live away from populated areas and it is the only option, this is how it is done.

Signs that the frost is imminent

When there are signs that frost is imminent at the time of flowering, start watching the temperature. Frosts happen almost always just before dawn, so you will need to stay up all night. The weather forecast does not always help, because frosts can be very local.

The clearest signs that a frost is about to happen are:

Most frosts happen under such conditions.

Fires need to be prepared in advance and positioned in different places in the orchard. If the orchard in not very large, they can be placed around its boundary.

The fires can be made from dry wood, but some wet material needs to placed on top. It can be anything that can produce a lot of smoke, such as damp straw or leaves. This is because it is primarily not the heat from the fires that gives plants protection, but the sheltering effect of smoke. It does not allow residual heat from the previous day to escape from the surface of the earth into the atmosphere.

The fires should not burn strongly, but rather smoulder: the idea is to produce smoke that would coat the trees.

This measure, in places where it can be used, can save the harvest. It is important, however, to pay attention and lit the fires at the right time.

Obviously smoke cannot be used in populated areas. So is there anything that a non-commercial gardener can do? Another traditional technique is to spray fruit trees and other plants with water.

This needs to be done before the flowers on fruit trees are defrosted by the sun. Therefore you should to it before dawn on the night when the frost happened. Using a watering can or a hosepipe, spray trees and other plants with cold water. This will reduce the damage from the frost.

Try to use a very fine spray, sa as not to damage the flowers. Trees that get the first rays of the sun, for example, those planted on the eastern side of the garden, should be sprayed first and more thoroughly. Even if the water sprayed on trees freezes, it will do less damage than quick melting due to sunlight.

Another traditional technique of preventing frost damage is to whitewash the trunks and large branches of trees. This can be done in areas where late frosts are common.

Whitewash prevents the trunk being heated by the sun and delays growth and flowering. As a result trees will miss the late frosts.

Positioning trees in the garden to avoid frost damage

Finally, the position where the trees are planted can be very important. If chosen well, it can help to prevent frost damage.

Frosts are more common in low-lying damp areas. Cold wind in high exposed places, without protection from hedges, trees or fences is also damaging. And on the contrary, closeness of structures that preserve heat at night, such as stone walls protects from frosts.

Interestingly, water bodies, including ponds, also preserve heat at night and do not allow the temperature to drop quickly. This is why gardeners put transparent bottles filled with water on beds with tender plants, such as cucumbers. They act as batteries, absorbing heat during the day and releasing it at night.

Blackcurrant – a Star of Northern Gardens