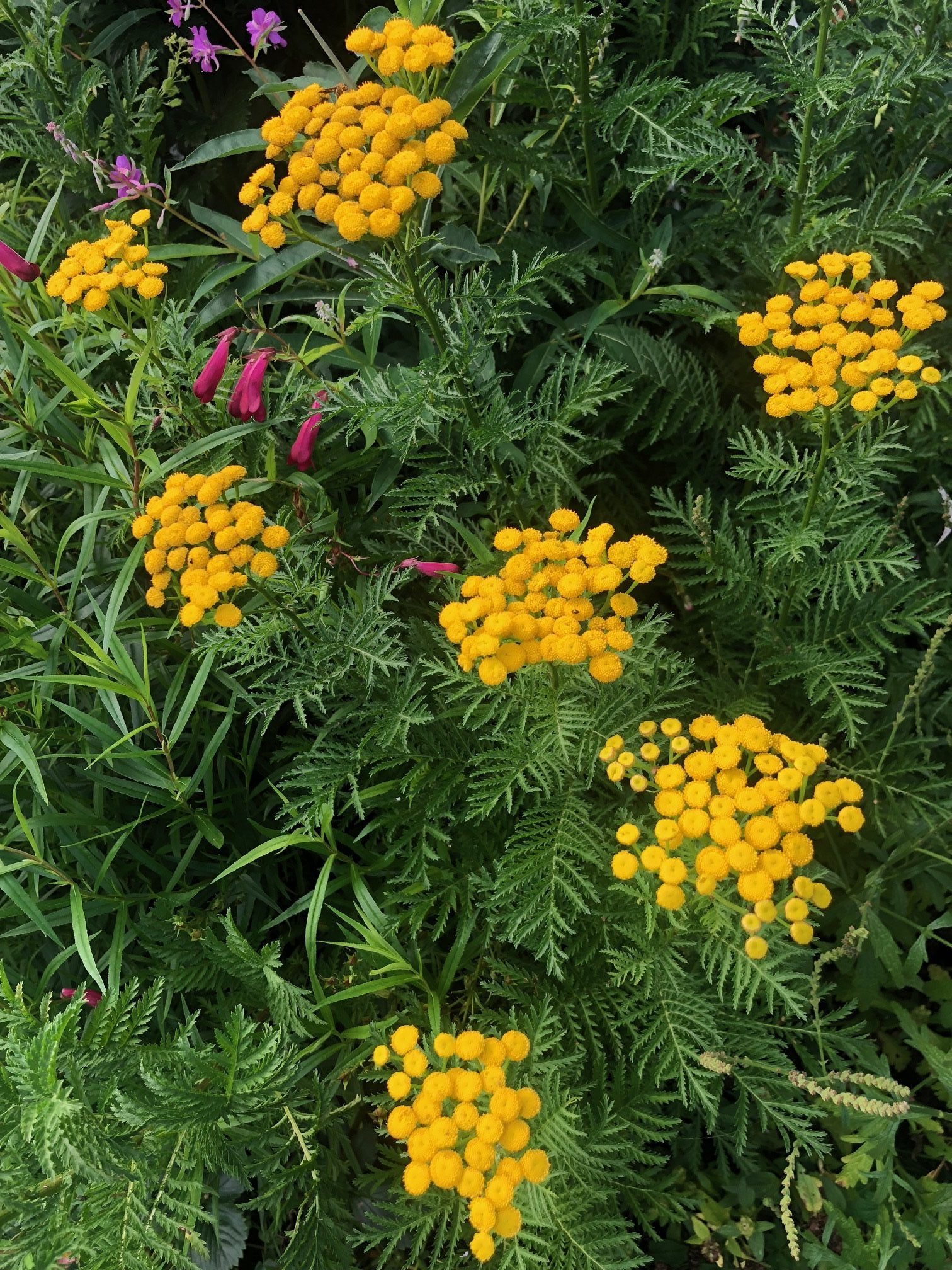 Tansy: What is it Used for?

Tansy (Tanacetum vulgare) is a beautiful perennial plant, belonging to the aster family, native to Europe and Asia, and naturalised in North America. Its Latin name is a combination of Greek words tanaos (‘long’) and aceomai (‘to live’), presumably referring to the plants’ ability to stay fresh as cut flowers for a long time and to keep their colour when dry. English name ‘tansy’ has a similar meaning: it is a medieval borrowing from French, going back to Greek athanasia (‘immortality’).

How to grow tansy

Tansy is undemanding and very easy to grow. It does well in poor soil, is ignored by slugs and other pests, and unaffected by weeks of drought.

Tansy is a tall plant – typically 60-120 cm. Its dark green, finely divided foliage looks beautiful from early spring till autumn. Its stems are sufficiently robust to stand without supports in the garden. It prefers full sun, but can be grown successfully in areas with some shade, for example, next to trees and buildings. In these conditions it will be taller and flower later, but will still look beautiful.

Tansy flowers in late July and August when many garden plants are already past their best. It combines well with yellow, red and orange flowers and berries typical of late summer and early autumn, such as helenium, rudbeckia, dog rose, rowan and pyracantha. It looks wonderful in flower arrangements and, true to its name, lasts for a long time in a vase.

The only problem with tansy is that it can be invasive. In the UK swathes of it can be occasionally seen on sunny verges of roads that are not mown frequently. They look striking when flowering. Unfortunately tansy is rare elsewhere, presumably because of the use of herbicides and fertilizers that are detrimental to most wild flowers.

The best way to grow tansy is to give it some space, if at all possible. It looks most beautiful if allowed to form a colony.

The use of tansy in medicine

Tansy has a strong camphor-like smell due to the presence of up to 2% of essential oil in its flowers and foliage. Its uses in traditional medicine are wide and diverse, and there are recipes for the treatment of hepatitis, inflammation of gallbladder, epilepsy, digestive disorders, migraine, irregular menstruations and parasitic worm infestations. It raises blood pressure and in the past was made into a treatment for hypotension. It was also used externally as baths and compresses to treat skin cancer, rheumatism, swelling and bruises.

Due to its strong antimicrobial properties, tansy functioned as a treatment for wounds and as an antiseptic. In Ancient Egypt it was one of the ingredients in embalming preparations.

For medical purposes, only dried flowers without stems are used, collected when yellow at the beginning of flowering. All recipes use alcohol- or water-based preparations of dried flowers.

The presence of a small amount of tansy in hay is believed to be beneficial for animals as it prevents parasitic infestations (and it was used for this purpose in veterinary medicine). In large quantities, however, it is toxic, and, if eaten by cows, can make milk taste bitter. This is, however, extremely unlikely to happen, because tansy is naturally avoided by animals, unless they are starving.

Tansy as a preservative

Another traditional use of tansy is as a preservative. Powder made from its dried flowers was used to preserve meat in the age before refrigeration. Meat was coated in a thick layer of dried flowers, so that no air could get through. It this state it was transported long distances from farms to markets in cities.

A thick coating of tansy was apparently sufficient to prevent any degradation of meat even in the heat of the summer: it remained fresh for days, keeping its taste and smell. When the powder was washed off, it was ready to be sold or used for food.

Tansy as insect repellent for home and garden

Tansy is a powerful insect repellent. It was hung in barns where domestic animals were kept to repel flies and other insects. Putting flowering plants in a room would discourage flies. Dried plants placed under beds are reportedly genuinely effective against bed bugs, and would deter cockroaches and flees.

Collect tansy flowers when yellow at the beginning of flowering. Dry in shade. Roughly break in a mortar, put in fabric sachets and place in draws, boxes or wardrobes where clothing is kept.

Make a strong ‘tea’ by boiling dried tansy flowers in water. Spray gooseberry and currant bushes at the end of flowering 3-4 times at an interval of 2-3 days to prevent caterpillar infestation in the middle of summer.

Tansy as a ‘companion’ plant

Plant a patch of tansy next to currants and gooseberries to deter insects. If there is space, tansy will be a beneficial addition to a vegetable garden as well, for its strong smell will confuse and discourage pests.

Tansy is used in small quantities to flavour food, particularly bread and meat dishes. It is also used as a flavouring in wine making and as an alternative to hops in beer making. It should be remembered, however, that tansy is toxic in large quantities and dangerous in pregnancy.

Collect flowers while they are still bright yellow and before they turn brown. Dry at a temperature no higher than 25C, because at a higher temperature essential oil will evaporate. Pulverize in a mortar and put through a sieve. The resulting powder can be used to flavour game and fowl dishes.

Dry and pulverize tansy flowers as described in the recipe above. Add 1 teaspoon of chilli pepper powder to 200ml cup of the powder made from dried tansy flowers. Use to flavour meat dishes and sauces.

Posts related to ‘Tansy: What is it Used for?’

Pin ‘Tansy: What is it Used for?’ for later