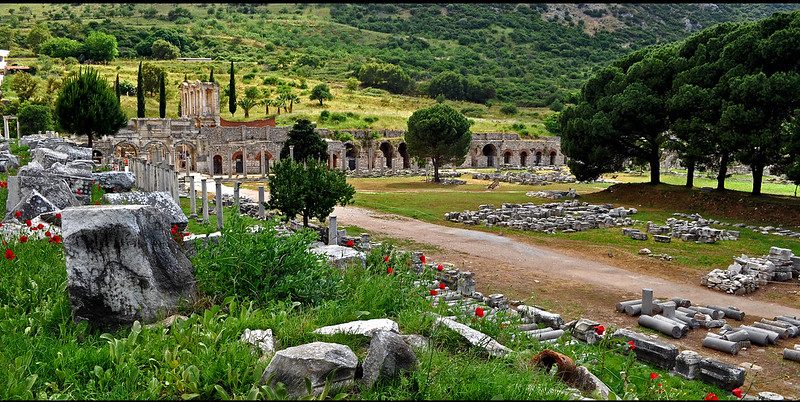 Odyssey is an epic poem in ancient Greek attributed to the poet Homer, who is also believed to be the author of another epic, Illiad. It is one of the oldest surviving works of literature probably composed in the 8th or 7th century BCE. Already because of its antiquity a mythological garden in Odyssey deserves our attention. It can show what people wanted form gardens in this distant past.

About Odyssey and Odysseus

The protagonist of the poem is Odysseus, king of Ithaca in Greece. He travels home after the end of a war between the Greeks and the Trojans, and it takes him 10 years to return to Ithaca. Odyssey describes numerous adventures, dangers and difficulties he encounters on this journey.

Odysseus is represented as brilliantly intelligent, resourceful and eloquent, always capable of outwitting his opponents. Homer repeatedly uses the words ‘Odysseus the Cunning’ to describe him. This refers to his ability to anticipate the future, plan, overcome obstacles, deceive and defeat his enemies.

A splendid palace in Odyssey

One of Odysseus’s adventures on the way home involves visiting a beautiful palace and a garden. Odyssey is sub-divided into 24 books, and Book 7 (lines 112-132) describes how Odysseus was helped by Alcinous, king of the Phaeacians.

Alcinous is portrayed very positively as a successful and admired ruler. We are told that people obeyed him as if he were a god. His sons were ‘comely as the gods’, and he honoured his wife as no other woman was honoured.

How the palace of Alcinous was decorated

The splendid palace of Alcinous is described in delightful detail. An account of generous reception, dining and entertainment offered there to Odysseus is one of the most captivating and charming parts of the poem.

According to Homer, the palace walls were made entirely of bronze and had a cornice of blue enamel. The floor was also bronze, while the lintel was silver. The doors were made of gold, and were hung on pillars of silver; their hooks were also gold.

In the king’s hall the seats were arranged along the walls, and had coverings of fine cloth woven by the women of the house. The chandeliers, that surrounded the dining table, were golden figures of young men, raised on pedestals, and holding lighted torches in their hands.

The palace had fifty maid servants, some of whom were always grinding ‘rich yellow grain’ at the mill, while others worked at the loom, for Phaeacian women excelled all others in weaving. Homer explains that the goddess Athena taught them many useful arts and they were very intelligent.

A mythological garden in Odyssey

On the way to meet the king Odysseus walks through the palace garden and lingers there to look around. We are told that it was a large garden of about four acres, surrounded by a wall.

It was full of beautiful trees, including pears, pomegranates, the ‘most delicious apples’, luscious figs and olives ‘in full growth’. Homer says that the fruit never rotted and the orchard was never without fruit. This is because the air there was so ‘soft’ that a new crop ripened before the old has dropped.

There was also an excellent vineyard, where grapes ripened all year around. They were gathered and made into raisins and wine.

In the furthest part of the ground were beautifully arranged beds of flowers, again in bloom all the year round. The garden was traversed by two streams, one of which was converted to ducts carrying water throughout the ground.

Planted by gods, but a purely utilitarian garden?

This was a splendid garden with which the gods endowed the house of king Alcinous. Presumably they lovingly helped to plant and decorate it. Very interestingly, however, it seems to have been a purely utilitarian garden.

The description in Odyssey suggests that it was planted in a symmetrical pattern and very well irrigated. It was used to grow fruit and vegetables, though also flowers. Tellingly, however, the flowers were grown in the furthest part of the ground. Were they grown for medicine, spices or dyes?

The fact that the garden was utilitarian did not preclude beauty. On the contrary, it was perfectly maintained and a joy to see. The description in Odyssey emphasizes the beauty of the trees, even though they were grown to produce food.

It seems that even the Cunning Odysseus was entirely captivated: he ‘stood for a while and looked about him’. Only after he looked long enough, he went into the house to meet the king.

Posts related to ‘A Mythological Garden in Odyssey’:

Pin ‘A Mythological Garden in Odyssey’ for later