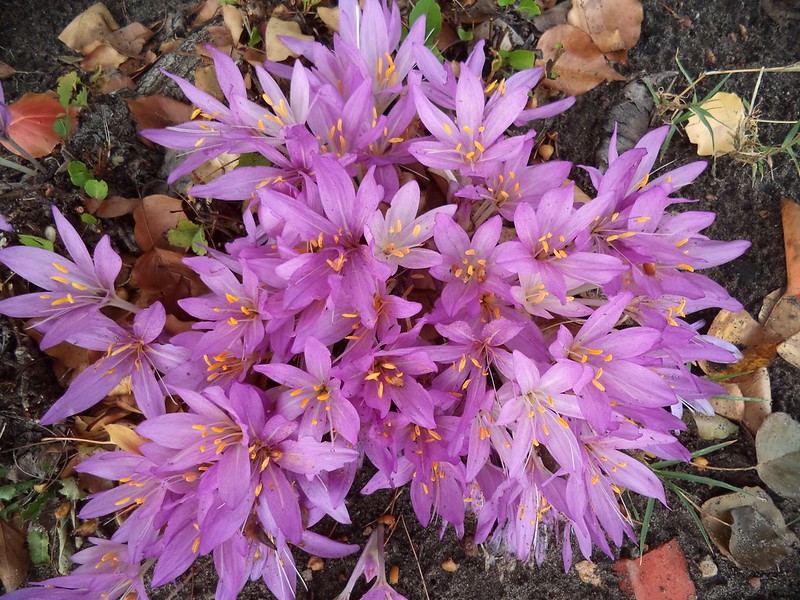 Autumn crocus (Colchicum autumnale) is similar to crocus in appearance, but belongs to a different botanical family. Whereas spring crocus is a member of the Iris family, autumn crocus belongs to the family Colchicaceae.

The roots of autumn crocus sold in shops, though resembling bulbs, are not a true bulbs, but corms. Bulbs are made of fleshy scales, whereas corms – of solid tissues.

The name Colchicum: Colchis and Argonauts

The name Colchicum derives from Colchis, an Ancient Greek name of a region on the eastern side of the Black Sea, in modern Georgia. This is the area where Colchicum grows wild.

Colchis is one of the settings of the myth of the Argonauts, a group of warriors who travelled from Greece on a ship Argo in a quest to find the Golden Fleece. In Colchis their leader Jason was helped by Media, daughter of the king of Colchis, to win the Golden Fleece in a series of trials.

One of the most attractive and striking forms of this plant is Colchicum speciosum which translates a ‘beautiful’ Colchicum. It is a large-flowered variety, that produces several deep purple-rose flowers up to 8cm in length. It is sold in garden centres in late summer and early autumn, and is often bought as a curiosity – a flower that grows without soil or water.

Indeed when the period of dormancy ends and the flowering time arrives (September – October), the corm flowers dry, without any care. This can happen anywhere – on a window sill, a desk or a shelf in a garden centre.

At this time Colchicum corms can be seen displayed in windows of flower shops for decoration and advertising. Such flowers are produced entirely due to nutrients stored in the corm and turn out a pale shade of pink or lilac, with long distorted stems and somewhat miserable looking.

To see autumn crocus in all its beauty one needs to choose a large firm corm. And some corms can be half a pound or more in weight! Plant it in a pot with garden soil, home-made or shop-bought compost, or even just wet sand or fine bark chippings. In these conditions a good corm will quickly produce several flowers.

The flowers will be more intensely coloured and more robust if pots are positioned in bright light, for example, on a windowsill or in a conservatory. It is important to plant the corms early, because flowering happens in September – October and cannot be delayed. Autumn crocus has an extremely short shelf life.

After flowering corms can be planted in the garden – Colchicum is hardy to -10 or -15C. In spring they will produce leaves. Leaves will die off in mid summer, and in autumn Colchicum will flower again.

Autumn crocus is best grown in soil rich in organic matter. It should be kept most, but not waterlogged. If grown in pots, it needs to be watered regularly with an organic fertilizer.

Colchicum looks lovely both in pots and in beds in the garden. And with availability of different varieties, including those with white and double flowers, such as double-flowered Colchicum ‘Waterlily’, there is every incentive to grow this beautiful plant.

Colchicum is often grown by children, but it should be remembered that fresh corms are highly poisonous. They contain colchicine that can cause strong irritation of skin, and should never be in contact with eyes.

At the same time Colchicum is a valuable medicinal plant. Its preparations were used in traditional medicine to treat gout, and colchicine is still used for this purpose today.