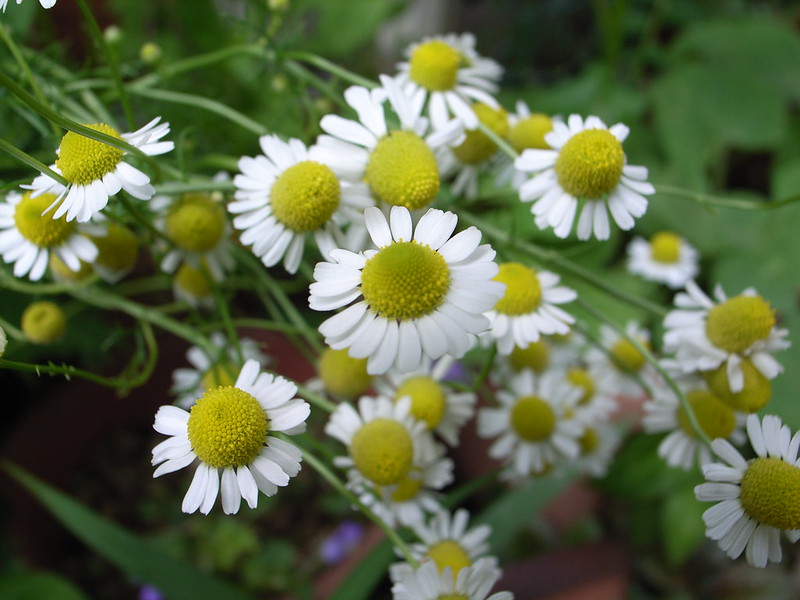 How to Grow and Use Chamomile

German chamomile (Chamomilla recutita) is an annual plant with a strong, but pleasant smell. It is a native of the southern and eastern Europe and Asia, now found on all continents. It has been cultivated since antiquity for use in medicine, cosmetics and aromatherapy. It is currently cultivated in many countries, with Egypt being one of the most important commercial producers.

Chamomile is mentioned already in the treatises of the Greek physician Hippocrates (c. 460-c. 370 BC). A Roman naturalist Pliny (23/24-79 AD) included it in his encyclopedia of natural sciences, and recommended to use chamomile tea for the treatment of hepatitis, and chamomile flowers boiled in olive oil for eczema.

A Persian scientist Avicenna (980-1037AD), citing a Greek physician Galen (129-c. 216AD), explains that chamomile is similar to rose in its gentle action, but is ‘hotter’ than rose, though it is also mild, like olive oil (The Canon of Medicine (Canon of Medicine by Hakim Ibn-Sina, 2:vi, 85)). Chamomile was held in high esteem by medieval physicians as well, and appears in all medieval medical treatises.

The flowers of chamomile contain a high percentage of essential oil responsible for their characteristic smell. The oil, that is dark blue in colour, has antibacterial and antiinflamatory properties. One of its most important constituents is chamazulene, a rare chemical found in few other plants. It has superior antioxidant properties and is a ‘free radical scavenger’. It prevents free radicals, highly reactive molecules, from damaging healthy cells. Chamomile oil is used to treat skin disorders.

Dried chamomile flowers are known to contain a range of medicinal compounds and are used to treat digestive disorders, liver conditions and arthritis. Chamomile also has anti-anxietal properties, and chamomile tea is used to combat insomnia and the effects of stress.

Growing chamomile in the garden

Chamomile is a typical ‘pioneer’ plant. It grows profusely on disturbed ground, including building sites and sides of newly built roads. The reason for this is that it is very sensitive to light. It cannot survive in established grassland, where it would be easily outcompeted and overshadowed by faster growing plants. It can grow only on sites where competition for light is low. With this in mind it is best to give it its own bed in the garden, though it can be combined with other not too vigorous annuals with similar needs, such as poppies and cornflowers.

Apart from the light requirement chamomile is very undemanding, though it prefers alkaline rather than acidic soil. It is hardy and can survive frost, heat and drought.

Chamomile is easy to grow from seed. Unlike many wild flowers, it enjoys richer soil, so it is a good idea to add compost to a bed where it will grow,

Sow it directly outside in spring or autumn to the depth of 0.5-1cm. If sown at the beginning of September, while it is still relatively warm, the seeds will germinate and start growing the same year. They will flower earlier than seeds sown in spring.

When the growth starts in spring, plants develop fast and begin to flower in May or June. The flowering may continue as late as October-November.

Chamomile flowers are harvested for medical and cosmetic use. Collect them at the start of flowering, in dry sunny weather, before midday. The chemical composition of plants changes throughout the day, and morning is believed to be the best time to collect medicinal plants.

Dry the flowers in shade, in a well ventilated room at room temperature – the sun and heat bleach the flowers and alter their chemical composition.

Store the flowers in a dark, cool, dry place, ideally in a glass, paper or wooden container, rather than in plastic. They will remain fresh for two years.

Tea made from chamomile is a popular drink that has a calming effect. It is recommended for tiredness, colds, to promote relaxation and good sleep at night, and to minimise the effects of excessive coffee drinking and smoking.

To make chamomile tea, put one tablespoon of dried flowers in a teapot and add one glass (200ml) of boiling water. Cover the pot with a lid and infuse for 20 minutes. Strain and drink before bedtime.

Side effects of chamomile

As with all medicinal plants, caution is essential. In some people chamomile can cause an allergic reaction. Chamomile has blood-thinning properties and should not be taken by those with bleeding disorders. It also should never be taken in pregnancy. An overdose of chamomile will result in headache, vomiting and drowsiness, so the tea should not be drunk in excess.

Chamomile is widely used in cosmetics due to its ability to reduce skin irritation and promote healing. As mentioned already, chamomile oil is an anti-oxidant and fights free radicals.

To make a tonic for dry or aging skin, put 2 tablespoons of dried flowers in a teapot and add a glass (200ml) of boiling water. Cool and strain. Using a cotton wool pad apply to skin 2-3 times a day. This treatment is also recommended for irritated and sunburned skin.

Chamomile is used in shampoos and conditioners because of its anti-inflammatory, antifungal and antibacterial properties. Chamomile tea has been traditionally used to rinse hair after washing. To make a hair rinse, put two tablespoons of dried flowers in a teapot and add 400ml of boiling water. Close the lid and infuse until the tea cools. Strain and use to rinse hair after washing.

Chamomile is also a natural dye that can give a golden tint to blond hair and can be used to colour grey hair. To get a more pronounced colouring effect, add 100g of dried flowers to 0.5 litre of boiling water, leave for 30-40 min, and strain. Apply to hair and put on a shower cap. Keep for an hour, applying the infusion repeatedly, if necessary, to keep the hair moist.

Image credits: ‘Chamomile’ by Toshiyuki IMAI; ‘On the isle of Fehmarn’ by Freddy Fehmarn, ‘Prescott Farm’ by Susteph.

Posts related to ‘How to Grow and Use Chamomile’

Elecampane: an ancient ‘sunflower’ of Europe

Pin ‘How to Grow and Use Chamomile’ for later