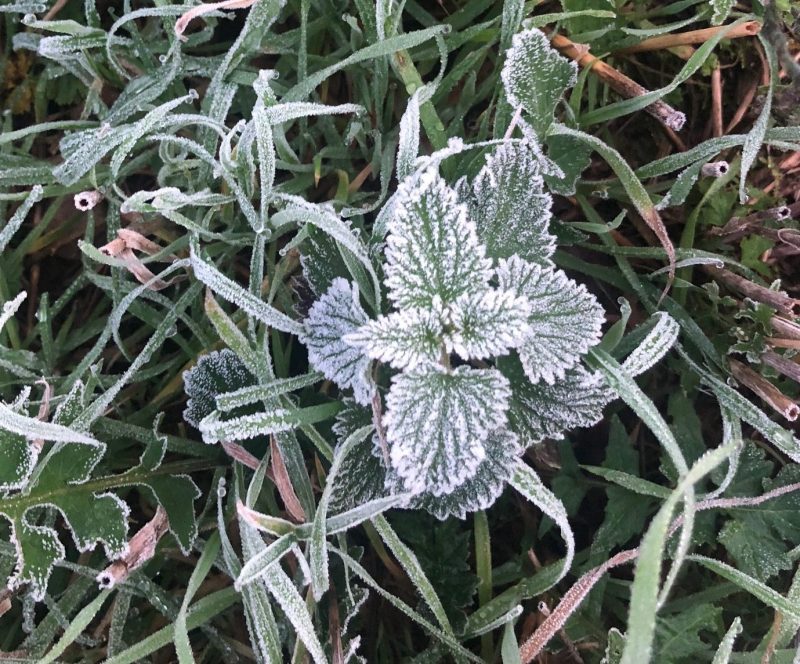 In spite of the lack of light and increasingly cold temperatures, it is still possible to collect edible wild plants in autumn and winter. Below I describe some of the wild greens that are available in milder climates through much of the year.

Why should we eat wild greens?

There are many reasons why wild greens should be a part of our diet. They are all very low in calories and highly nutritious. There is extensive research showing that they are significantly richer in minerals and vitamins than many cultivated plants. Evidence from such research suggests that eating wild greens regularly can prevent disease, improve immunity and increase well-being.

In addition all plants listed below are extremely prolific (and therefore often classed as weeds!). They are entirely undemanding. Therefore they are either already present in many gardens, or can be easily introduced and grown organically as nutritious no-effort vegetables. Seeds and young plants are readily available from wild flower nurseries.

Finally, wild greens are by definition seasonal and local. They allow us to experience the true taste of the season and feel more attuned to nature, and more in harmony with its cyclical life.

Wild sorrel grows in the sun in meadows and other open spaces. It is available from early spring till late autumn or early winter. It is cultivated as a vegetable in many countries, including France.

Sorrel has a lemony taste and can be used in a wide range of dishes. It is a common ingredient in soups and salads. There are many recipes for puréed and other soups where sorrel is used on its own or with other vegetables and wild greens.

Sorrel is also good in omelettes, as a filling for pies in combination with other vegetables, and, like spinach, in vegetable dishes. Because of its strong taste it is an excellent ingredient in sauces (in the same way as mint), particularly for fish dishes. Due to its high content of oxalic acid, like spinach itself, it should be used in moderation.

Salad burnet prefers sun and grows in meadows and other open spaces. It is typically found in poor chalky soils. It is not very common, but is sometimes cultivated as a decorative plant. There are several named decorative cultivars.

Salad burnet has a slightly bitter, nutty taste and a smell that resembles cucumbers. Older leaves are tougher and more bitter, whereas young leaves are highly attractive, very tender and excellent in salads. Salad burnet can be also used in soups and vegetable dishes.

Oxeye daisy is extremely common and grows in the sun, in meadows and other open spaces, on alkaline soils. It is often cultivated in gardens as a decorative flower.

Young leaves of oxeye daisy are very tender, particularly when it grows on richer soils. They are good in salads and can be used like spinch in vegetable dishes.

Oxeye daisy does not have a particularly strong taste and will balance more bitter-tasting vegetables. Its smell is subtle and resembles parsley.

Chickweed is typically found close to human habitation, in gardens, on disturbed soil, verges of roads and edges of woods. It prefers half-shade and most soil.

Chickweed flowers from very early spring and untill late autumn or early winter. It has a subtle, very fresh taste, resembling cucumber. It is rich in carotene and vitamin C.

Young shoots of chickweed are tender and succulent, and really excellent in salads. It can be also used in soups, vegetable dishes and as a filling for pies similarly to spinach.

Primrose is a cool weather plant and one of the first wild plants to flower in spring. It prefers half-shade and is most commonly found in deciduous woodland. There are many decorative varieties of primrose with large flowers in different colours. They are typically grown in gardens in winter and spring. Decorative varieties are of course also edible, but it is important to ensure that they are organic and have not been sprayed.

Leaves of primroses often start growing already in autumn. In warmer areas, such as gardens, first flowers may also appear in late autumn. Both young leaves and flowers are good in salads, and flowers can be used to decorate deserts and vegetable dishes.

Primrose leaves are high in vitamin C. They usually have a mild taste that resembles lettuce. Occasionally, however, the taste is stronger and slightly bitter. Very young leaves are the best.

Chicory grows in the sun in meadows, on disturbed soil close to human habitation and on verges of roads. It is cultivated as a vegetable, often blanched.

Dried roots of chicory are used as a source of carbohydrate inulin and as a healthy, caffeine-free and nutritious alternative to coffee. Young leaves of wild chicory are tender and mildly bitter, and are excellent in salads in combination with other leaves.

There are several different species of clover, including white, red and pink. They are all very common and grow in meadows and other sunny open spaces. The leaves of all varieties of clover are edible and available from very early spring and until late autumn and winter.

Clover leaves have a mild fresh lettuce-like taste and are excellent in salads, soups and vegetable dishes, where they can be used in the same way as spinach.

Flowers, available from May to September or October, are also edible. They can be used in the same way as leaves, or to decorate deserts and vegetable dishes. Flowers have a lovely summery smell resembling the smell of honey.

Nettle is a very common plant that grows on disturbed ground, next to human habitation, in both sun and shade. It can be blackened by hard frost, but otherwise has a very long growing season. It is one of the most nutritious wild greens, used in a wide variety of dishes.

In cooking, leaves and tops of young nettles, before they flower, are used. You need to wear gloves when collecting and washing them. They can then to be boiled or scorched with boiling water, and used in the same way as spinach.

Nettles are most commonly used in soups, for which there are many recipes. But they are also good in other hot and cold dishes, for example as a filling for pies and in a sauce similar to pesto.

Most recipes require that nettles are boiled for 1-3 minutes. Once cooked, they taste similar to spinach, but the texture is different because nettle leaves are slightly hairy, while spinach leaves are smooth.

Dandelion grows in meadows and other open sunny spaces. It is extremely prolific, and easily sprouts in any disturbed soil and as a ‘weed’ in gardens.

Dandelion leaves are available from very early spring and until late autumn or winter. They are highly nutritious and can be used both raw and cooked.

Dandelion is cultivated as a vegetable in France. Its young leaves are tender, succulent and moderately bitter. They can be used in smaller quantities without any preparation in salads with other leaves that would counterbalance their bitterness. Alternatively they can be soaked in salty water to remove any bitterness.

Fat hen is a very prolific and fast growing ‘pioneer’ plant that colonizes almost any disturbed ground. Masses of young plants typically sprout on harvested fields in August and September. They also pop up in gardens after vegetable beds have been cleared. Such young plants continue to grow in late autumn and early winter.

Fat hen is a close relative of spinach and some of its varieties are cultivated as vegetables. It is used in the same way as spinach, and as spinach it should be used in moderation due to its high content of oxalic acid.

Tender and succulent tops of plants have a fresh mild taste and are excellent in salads, as well as soups and cooked vegetable dishes. Like nettle, fat hen is very rich in protein.

Winter salad made from wild greens

A winter salad made from a mixture of these plants, finely chopped to allow different flavours to mix, and with a dressing added, is a very healthy and tasty food. It is definitely worth the effort.

Needless to say plants should not be collected in areas (sadly extremely numerous) that are exposed to chemical pollution. For example, never collect them next to roads or fields where pesticides and herbicides are used.

Posts related to ’10 Edible Wild Greens for Autumn and Winter’

Chickweed: A Weed or a Delicious Salad Crop?

Pin ’10 Edible Wild Greens for Autumn and Winter’ for later