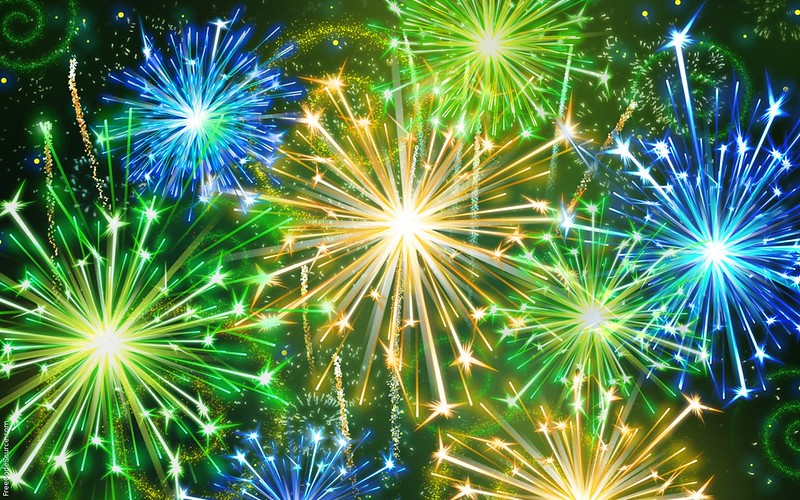 New Year is a strange festival. It is celebrated very widely and on a large scale, both privately and publicly, with parties requiring glittery outfits, restaurant dinners, extremely expensive on New Years Eve, and lavish firework displays put up by national and local governments. But why do we do this when nothing is happening in nature, and the date chosen for the start of the new year is arbitrary?

An important attraction of the New Year is that it is inclusive: unlike religious festivals it is celebrated by people of different faiths. Though there are variations in date – thus, Chinese New Year is celebrated in January or February – New Year festivities are generally international. It is probably the most widely celebrated across the globe and therefore the most uniting festival. For many New Year’s Eve is the time to call friends and family in different countries to congratulate them when their New Year arrives. The festive atmosphere is intensified by the media that compares national fireworks displays and celebrations as the New Year progresses from east to west.

The date for the start of the New Year is conventional

The date for the beginning of the year is indeed conventional. In England, for example, a decision was made in 1155 to move the start of the official new year to March, because it was believed to be the first month in the calendar of ancient Rome. There is indeed evidence that in very early Rome the year opened with March, but from 153 BCE the Roman year officially commenced on 1 January.

An Anglo-Saxon historian Bede reports that pre-Christian Anglo-Saxons celebrated the beginning of the year at midwinter feast on 25 January. There was therefore almost certainly fear that pagan traditions associated with this feast will continue. As a result the new date selected for the new year in 1155 was 25 March, a Christian feast of the Annunciation. This continued in Britain until the calendar reform of 1752, when the New Year was returned to the 1st of January. It was an official endorsement of what was happening in practice: the 1st of January continued to be celebrated as the New Year’s Day throughout the medieval and early modern periods.

The date for the New Year may be conventional, but it is not entirely arbitrary: there is a strong connection between the New Year and winter solstice.

Since the winter solstice cannot be easily observed, ancient scholars were not absolutely sure of which was the shortest day and the longest night. Ronald Hutton reports that Roman naturalist Pliny, in the first century, put them at 26 December, while another Roman author, Columella, writing around the same time, guessed at 23 December. The official Roman calendar marked them at the 25th of December.

In addition to the difficulty of determining the precise time of the solstice, there was another problem that plagued calendar makers throughout history: the sun and the moon cycles cannot be reconciled. December 21 may be an important date in the sun calendar, but it does not mean much in the moon calendar – it does not correspond to the start of a month. In some cultures therefore new year does not begin on the day of the solstice, but on the first day of the month that follows the solstice.

Romans celebrated New Year with revelry, ‘silly’ behaviour and a temporary suspension of social norms and prohibitions, the giving of gifts, fortune telling and various rites designed to ensure good luck for the rest of the year. All these elements are also present in the later traditions. New Year celebrations in different cultures are associated with the following:

The winter solstice was interpreted as rebirth of the sun, and therefore fire and light featured widely in celebrations. Candles were commonly given as presents by the Romans. In Europe there was a tradition of lighting a ‘new fire’ in the hearth on New Year’s morning – fire was ceremoniously ignited using a traditional technique, such as a fire striker. Fireworks, that became popular in Europe in the 17th century, are part of our modern celebration of the return of light.

Anticipation of spring, rebirth of nature and the start of a new agricultural season

There is a tradition of celebrating new year at the end of winter or in early spring, as evident in the Chinese New Year, also known as the Spring Festival. Anticipation of spring can be seen in the use of evergreen plants at the winter solstice celebrations – they symbolise a continuing presence of life in the depths of winter.

Special food and drink are generally characteristic of festivals, but at Christmas and New Year we tend to be particularly extravagant. Shops start selling fresh cherries, exotic fruit and luxury food of all kinds. And this happens at a time when the land looks barren and the food is naturally in short supply. Why do we do this? Perhaps we are rewarding ourselves for having worked in order to have more than enough at the darkest time of the year.

In the late Middle Ages in Europe exchanges of presents at New Year were primarily an aristocratic custom. They symbolised and endorsed political and social order. Ronald Hutton reports that presents sent by the young British monarch Henry VI to members of his family included tablets of gold studded with jewels, a ruby set in a gold ring, and a gold crucifix decorated with sapphires and pearls. Queen Elizabeth I in the 16th century gave gold or silver plate in fixed quantity, from the 136 ounces due to her current favourite, such as Robert Dudley, to the 2 ounces received by the court dwarf. In return she accepted rich clothing, money, jewels, and individual presents down to the marzipan sent by her cook.

The custom became more widely spread in the 17th century. Examples of commonly made presents mentioned by 17th-century authors include an orange, rosemary, brooches, gingerbread, marzipan, and wine. At Cambridge in the 1660s the aldermen sent fowl or rabbits to the mayor, who provided a feast in return.

This is widely attested as part of the New Year celebrations. The New Year was seen and is still seen today as a special time, when life interrupts its normal course, when magic is possible and miracles can happen.

In England, Wales, Scotland and elsewhere in Britain there was a tradition of the First Foot – a belief that the first person entering a home at the New Year could influence its luck during the coming twelve months. Ronald Hutton observes that the favoured First Foot was almost always male, preferably adult and dark-haired – this endorsed gender and biological normality stereotypes.

Hutton points out that women were not excluded from the rite, though they were given a subservient role. At the north Yorkshire fishing village of Staithes, for example, their task was to sweep the hearth clean and wash any dirty crockery in preparation for the First Foot’s coming, and to welcome him.

The custom was most elaborate and highly developed in northern England and the Lowlands of Scotland, and may have originated there. The First Foot was generally expected to put some food on the table and fuel in the hearth. In County Durham he had to bring bread and a bottle of spirits. At Staithes he gave a silver coin to a woman, put a coal in the hearth, said ‘May your hearth never grow cold’, cut a cake, and made a speech of goodwill. Near Sheffield in 1907 he brought a mince-pie, coal, and whisky. The same was true in Scotland, where whisky was the most valued component among the gifts. In Nottinghamshire by the 1950s the caller was expected to bring silver, bread, and coal, while Staffordshire First Footers had a glass of wine in one hand and a lump of coal in the other.

To conclude, it seems to me that it is OK and even highly recommended to celebrate the New Year. It coexisted with Christmas and other religious festivals throughout history. A very strong tradition of celebrating midwinter and New Year was not eradicated by political and cultural change. It is therefore not a modern fad, but an ancient festival, and we are not breaking with the traditions of our ancestors, but on the contrary continuing them when we treat it as a special time.

I very much hope that you are able to celebrate it even at present difficult times. Happy New Year to you all!

Ronald Hutton, The Stations of the Sun: a History of the Ritual Year in Britain (Oxford: Oxford University Press, 1996)