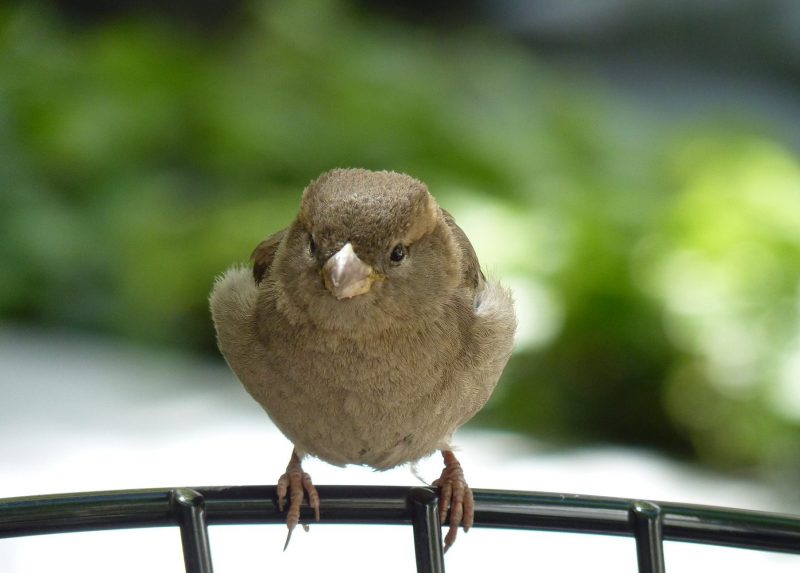 How to Attract Sparrows to your Garden

House sparrows have evolved to live side by side with humans – human settlements are their primary habitat. Originally limited to Northern Europe, they spread to all other continents, wherever there were human dwellings. For millennia they have been our companions, well adapted to live in conditions constantly changing as a result of human activity.

Towards the end of the 20th century, however, sparrows drastically declined in several European countries, in some approaching the verge of extinction. Previously plentiful, they disappeared from large cites in Britain, including London. Can they be a biological ‘indicator’, revealing the state of health of our most immediate environment?

Sparrows were once zealously persecuted as agricultural pests. The only attempt to eliminate them that had a temporary success, however, was the Great Sparrow Campaign in China in the 1950s. As is well known, its outcome was a major ecological disaster, proving beyond any doubt that sparrows do much more good than harm to food production.

Other less drastic, but nevertheless large-scale attempts at control sparrows in the past, made in most European countries, were entirely unsuccessful. That is until about the 1970s. What guns, traps and poisons could not do in the past, modernization and industrial agriculture eventually achieved. Once extremely common in streets and gardens, sparrows are now almost entirely gone.

According to the British Trust for Ornithology, house sparrows have declined by 71% since 1977. The Trust undertook a detailed study and identified several reasons for this decline, including growing pollution, reduction in the availability of food, the loss of nesting sites and increased predation.

Other causes cited by researchers are frequent lawn mowing, sadly ubiquitous in cities and country gardens, that destroys insects’ habitats. This in turn leads to breeding failure, for insects are the main food of sparrow chicks. The use of agricultural chemicals has the same effect of eliminating insects, and also increases the level of toxins in grain.

Is there anything we can do to help to reverse this situation?

How to attract sparrows to your garden

Sparrows are predominantly ground-feeding birds, so food should be left on the ground. It is important to ensure, however, that birds are not in danger from cats. If it is impossible to leave the food in an open space, where cats will not be able to lurk, it is much better to use feeders suspended from trees or poles. Sparrows visit feeders as well. They are generally intelligent and will find food.

Provide water for sparrows to drink and bathe.

There are many inexpensive and well designed options available, including ‘terrace style’ boxes, specially designed for sociable sparrows. Autumn and winter are a good time to put up bird boxes to be ready for the nesting season next spring.

Sparrows love hiding and socialising in dense vegetation. Early in the morning they can be often heard chipping loudly in dense shrubs growing by the sides of roads. If you have an overgrown pyracantha, conifer, or any other ‘thicket’ in your garden, it is certainly a major attraction for sparrows.

Give up the use of pesticides, herbicides and fungicides. They kill insects that are young sparrows’ essential food.

Rewild as much of your lawn as is practical. This will increase the populations of insects, and insects will attract sparrows, as well as other birds.

Read my post Small Scale Rewilding: How to Rewild your Garden.

7. A secret weapon for attracting sparrows

When we first installed sparrow boxes in our garden, sparrows did not use them for two or three years, even though they visited the garden frequently. What finally persuaded them to settle, was … beetroot that I planted in a vegetable bed.

I bought beetroot seedlings, about 5cm tall, from a garden centre and planted them in a raised bed. Within 2-3 days they were eaten to the ground. I did not know who was responsible and blamed the slugs. So I planted the seedlings again, but kept an eye on them this time. It did not take long to discover that the merciless beetroot destroyers were sparrows. Their appetite was insatiable, and it was specifically for beetroot – they ignored all other seedlings. That year they nested in the garden for the first time.

Now, when I sow beetroot in spring, I cover it with a net, letting it to grow to about 10cm, large enough not to be totally eliminated. After that I let sparrows do what they want, and they nibble leaves, but without seriously harming the plants. Of course they prefer young seedlings, so I also sow some ‘sacrificial’ beetroot in containers, specially as a treat for sparrows.

Sparrows in my garden

For several years now we had sparrows nesting each spring in the sparrow terrace box under the roof of our house. For whatever reason, however, only the right-wing compartment of the terrace is always occupied – is it something to do with political preferences of the local bird population?

The breeding season activity usually starts in late March with the stripping of the pampas grass that grows in the garden and has beautiful fluffy seedheads each winter.

Though the grass is very prolific, and there are always plenty of seedheads, in some years every single bit of ‘vegetable fur’ is stripped and taken away by sparrows. Some of it is carried into our box. In spring we see bits of grass, fallen from sparrows’ beaks, on the ground forming a trail that leads towards the box. When the seedheads are completely stripped, and only bare stalks remain, sparrows still continue to come and sit on the stalks, looking bewildered, as if wandering – where is it all gone???

We can see the grass from our living room window, and every year we observe its demise. Interestingly it is only the sparrows that take it. I assume it is because they are more comfort-loving than other birds, for surely pampas grass seedheads must make very soft beds?

The grass is now out of fashion with gardeners and many get rid of it laboriously, considering it to be a useless plant. But it actually has its value and not only as a source of soft furnishings. We have seen birds’ nests built in the grass at a height of only about a metre. Though sufficiently low for cats to attack, they were nevertheless inaccessible, protected by a jungle of sharp-edged leaves.

But back to the sparrow terrace, after some weeks of intensive refurbishment activity, everything goes quiet for a while, until we start hearing the gentlest and barely audible chirping. It is very soft at the beginning, but gradually becomes stronger, louder and more demanding as the chicks grow. Mummy and Daddy constantly rush in and out until very late in the evening, bringing back every manner of beast, and always greeted with an excited chorus.

Eventually we start seeing the chicks looking out of the box and chipping to attract the parents’ attention. Then, one day, sometimes discretely, sometimes with an increased activity and a change in the parents’ behaviour, the chicks leave. Everything goes quiet for a while, until after some more refurbishment, the cycle starts again. Every year two lots of chicks are produced, and we have the pleasure of observing them until late June or early July.

Sparrows are extremely pleasant to watch – exceptionally cute, full of character, social and energetic, and always busy chipping, quarrelling, dust-bathing, eating and breeding. There is usually some kind of drama happening in the garden – we have seen them, always acting as a group, trying to deter starlings from investigating their terrace, or attempting to win a birdbox from blue tits.

Sparrows are generally unafraid of humans and prepared more than most other birds to share their lives with us. This is in spite of the sad story of our relationship with them. Somehow they still remember the ancient covenant that tied us together – unlike us, they seem to understand that as species we have evolved to live side by side, and so we need each other and would do better together.

Are sparrows good or bad?

It is incredibly difficult to protect orchards, fields and gardens from insects. Even now when the numbers of insects have drastically declined, farmers have to drench their crops every year with multiple applications of poisons to save them from being destroyed.

But the same can be done by voracious birds, eating thousands of our enemies each day. If you see them busily rummaging in your garden, be careful not to disturb them – it is likely that there is something there delicious for them, and what you would not mind to be rid of.

For their services they have a right to a share of our crop, for it is not enough to plant, it is equally important to preserve. Sparrows’ role in helping us to protect the crops, however, is much more difficult to see, then their ‘stealing’ when they come to claim their due reward.

But we must not take everything from them, without giving anything back: the ideal is a mutually beneficial coexistence and collaboration of living beings. Of course we may have discovered how to achieve what was previously impossible without our helpers, and swapped them for pesticides and herbicides. But the cost of this is proving to be far too great. I hope our true friends, now badly in decline, will return.

Posts related to ‘How to Attract Sparrows to your Garden’

Best Wild Flowers to Grow in the Garden