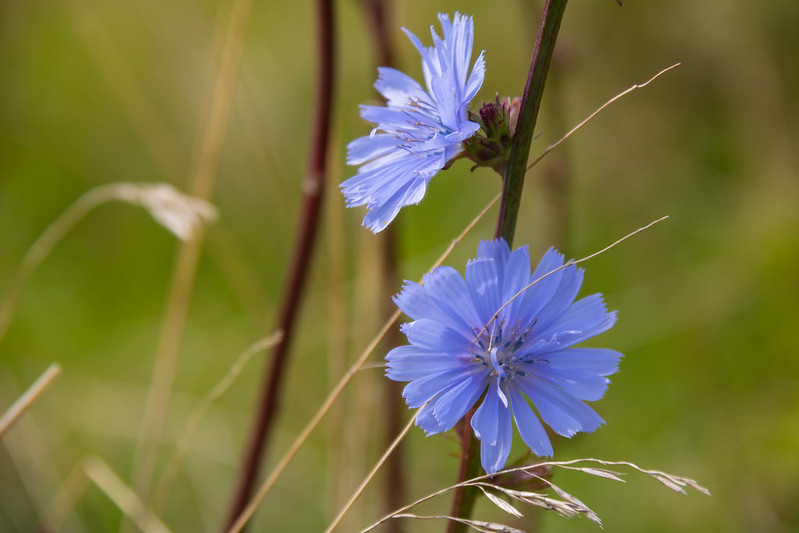 How to grow chicory and enjoy it as a flower, salad vegetable and coffee? Growing chicory is simple, and in this post I explain how to do it all, using traditional techniques.

Chicory (Cichorium intybus) is an attractive perennial plant of the dandelion family. Though it is grown commercially, it is rarely cultivated in personal flower and vegetable gardens. It is, however, a very versatile plant that can be grown for its beauty, as well as for its taste and nutritional benefits.

How to grow chicory as a decorative plant?

Wild chicory can be bought from wild flower nurseries and grown as a decorative plant. It flowers for a long time in summer and autumn, from July to September or even October. At the height of its season it is densely covered in flowers. They last only for a few hours, opening at dawn and fading in late afternoon. Many more, however, open the next day.

The flowers come in a most beautiful, pure and rare shade of blue, resembling the colour of the sky on a bright summer day. On a sunny morning it is a truly uplifting sight.

Chicory is also excellent for bees, as it produces a large amount of nectar. Unsurprisingly, bees constantly visit it in my garden when it flowers.

Position in the garden

Chicory is a large plant that can easily grow 120-150cm tall. Therefore it is best positioned at the back of the border, next to other tall plants. Otherwise, it can overwhelm any smaller neighbours.

Chicory is best grown in full sun. It needs a sunny position to flower prolifically and develop robust stems that won’t require any staking. It deserves a place in a sunny border because of its stately appearance and a lovely colour of its flowers.

Chicory needs well-drained alkaline soil. In the wild it grows on chalky soils.

Wild chicory is frost-hardy to zone 3, resistant to drought and does not require any special care. It is very undemanding and an excellent plant for a busy organic gardener.

Wild chicory as a vegetable

Wild chicory leaves are edible and, like many wild greens, highly nutritious. I use them in salads through much of the year.

Chicory produces young leaves in large quantities from very early spring and until November. This makes it a useful out-of-season, winter salad vegetable. But unlike most salads, it requires absolutely no effort.

Very young wild chicory leaves are tender and only slightly bitter. I also find that bitterness disappears when they are finely chopped, mixed with other leaves and given a dressing. If grown in the sun the leaves develop attractive red veins.

Growing chicory as a vegetable

Traditionally chicory has been cultivated for its leaves used in salads, and for its roots used to make chicory ‘coffee’.

There are also chicory varieties that are grown without blanching. Such plants produce large lettuce-like heads in late summer and autumn. They are grown similarly to other salads. An example of this second type of chicory is radiccio. It produces tight leafy heads that turn dark red as the temperature becomes cooler and days shorter in late August and early autumn.

A traditional technique of growing chicory described below can be used to grow blanched leafy buds (chicons), chicory roots for coffee and chicory seeds for future crops.

The seeds used with this method can be those of modern forcing chicory varieties, such as Witloof, bought from shops. Wild chicory, however, can be also grown in this way. Modern varieties produce larger milder tasting crops, whereas wild plants are more nutritious.

Growing chicory from seed in spring

The requirements of chicory are similar to those of carrot and beetroot. It needs deep, fertile, loose and free-draining soil. It is important, however, not to apply manure or other fertilizers. This would encourage a vigorous growth of leaves at the expense of the root. But the roots need to be produced first, to grow chicons in winter, to make chicory coffee and to grow seeds for future crops.

1. Sow the seeds, ideally when they are two years old, in spring, directly in beds where chicory will grow. The seeds are small, and to make sowing easier one part of seeds can be mixed with two parts of sand. Sow thinly, in rows 30cm apart.

3. Firm the soil with a wood plank or a garden roller. This will ensure that the seeds have a good contact with soil and will germinate evenly.

How to care for young chicory plants in summer

Thin the seedlings, if they are growing too densely, leaving a distance of 15cm between them. After this the plants can be left to grow for the entire summer. Weed them occasionally, if necessary.

How to harvest and sort chicory roots in autumn

In autumn, before the first frosts, dig the chicory plants out. In milder climates this can be done in November. Cut off the leaves leaving to about 5cm above the top of the root.

Sort the roots into three categories:

Here is how to grow chicory for seed for future crops.

1. Store the roots selected for this purpose for winter in a cool dry place. Check the roots occasionally to make sure that they don’t rot.

2. Plant the chicory roots out as soon as the soil warms up, at a distance of 15cm from one another.

3. Water them once and leave to grow all summer. Weed occasionally, if necessary. The plants will flower from late June or early July onwards and set seed in late summer.

The best seeds are those that grow on the lower half of the flower stock.

Seeds should not be collected from plants that flower in their first year, as occasionally happens. It is not a desirable characteristic in chicory, because roots of such plants will be too tough in autumn to be used for food.

1. Roots selected for forcing in winter need to be planted immediately after harvesting and sorting. Plant them in pots or boxes with compost. Position the roots at a distance of about 5cm from one another.

When planting, make sure that the top of the root rises by about 1-1.5cm above the soil. The surface of the soil can be covered with a layer of sand to prevent rot.

2. Store in a cold place, ideally at a temperature of about 0C.

3. When the time comes to use the roots, bring them to a cool room. Water and keep for three days at a temperature of 5-6C.

4. After this bring the pots to a warm and completely dark place, and keep at a temperature of about 20C. Alternatively, cover the pots with a black polythene bag to exclude light or with a pot with drainage holes covered.

5. Continue watering the roots and keep them in warmth and darkness throughout their growing period. In such conditions they will produce white and very tender buds – known as chicons. When chicons grow to about 15cm long, they can be cut and used for salad.

6. If after this chicory root is left in the darkness and watered, it will grow another bud. Force a few roots at a time, bringing more into the warmth as needed.

Dried or roasted and finely ground chicory roots can be made into a hot drink that tastes similar to coffee. This is how to do it.

Chicory root and leaves are widely used in traditional medicine. Chicory coffee is recommended as a substitute for coffee for people with high bold pressure. Usefully, it does not contain any caffeine.

Drinking one cup of chicory coffee with honey and lemon in the morning, before eating, can prevent high blood pressure developing even in those who have a predisposition to it.

In addition, chicory root coffee is recommended as a drink that can effectively lower blood sugar, calm nerves and improve digestion and liver function.

Pumpkin as a Decorative Climber: the Useful and the Curious

Pin ‘Growing Chicory for Leaves, Flowers and Coffee’ for later