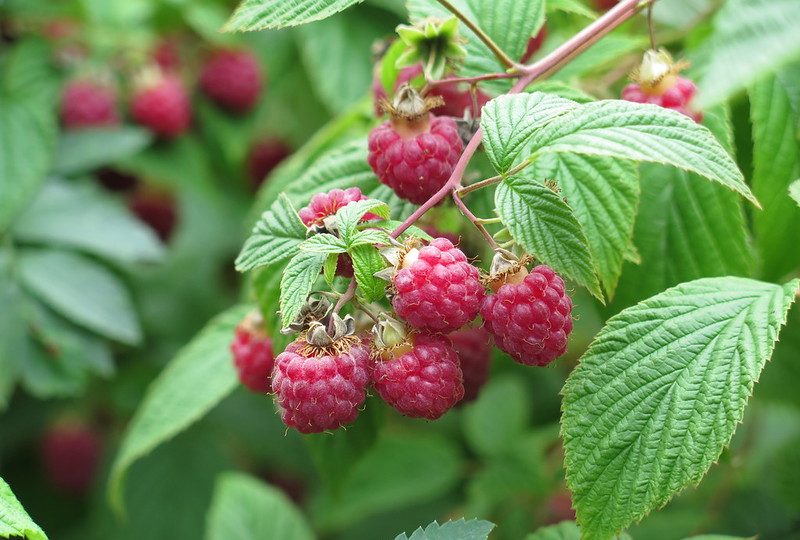 Growing Raspberry: a Perfect Fruit Bush for Any Garden

Raspberry is a wonderful small fruit bush, suitable for almost any garden. It is undemanding and easy to grow. There are many different varieties, including red, purple and yellow, early and late. In a larger garden, with a space for several cultivars, it is possible the have raspberries from early July and into mid autumn.

A fruit bush for partial shade

As woodland shrubs, raspberries are tolerant of some shade. I am a great fan of an immensely popular modern Polish variety ‘Polka’. I planted it after reading reviews pointing out that it can do well in some shade. This turned out to be absolutely true.

It grows in my garden in less than perfect conditions, getting about half a day of sun. As a result, it ripens later, in the second week of August, rather than in the second half of July. This, however, is not a problem because it also finishes later. It continues to fruit at least until the end of September and, if the weather is at all reasonable, into early October, when raspberries are very desirable.

Does raspberry come back every year?

Raspberry is a perennial plant. Some raspberries, including ‘Polka’, bear fruit on the current year’s growth. This means that the canes die off completely in late autumn after they have produced fruit. They are therefore cut down to the ground in autumn to make space for new shoots that will appear in spring and bear fruit.

This makes raspberry a very adaptable garden plant. It is not a problem if any canes did not grow the way you wanted, or were broken by the wind, children or pets, because next year there will be a fresh start.

Some varieties, however, bear fruit on the second year’s shoots, so it is important to check the growing instructions when choosing a cultivar.

What can you plant next to raspberries?

Since the canes are cut down each year, they can be underplanted with spring flowers, such as crocuses and daffodils, maintaining a decorative look in the garden. Spring bulbs flower early, either before the raspberry shoots emerge or while they are still very small.

When the bulbs finish flowering, their decaying foliage is concealed by the young raspberry growth, highly ornamental in its own right.

How much space do raspberries need?

Raspberries are typically only about 1.5m tall and so will not create shade in the garden or antagonize the neighbours. When cultivated on a larger scale, raspberries are planted in rows with 50-70cm between the plants and 1.5-2m between the rows.

It is not essential to have a large number of plants. Three or four plants, each growing several canes, will produce plenty of berries during the season.

Are raspberries good for wildlife?

Raspberry is a perfect plant for pollinators. Its flowers are very rich in nectar and are constantly visited by bees. Because the flowers face downwards, nectar is not washed off by rain and is available to insects even in bad weather.

***Read more about nectar and its use by bees and other insects: What is Nectar: Basics for a Bee-Lover

***And here is a list of plants, including raspberries, ranked by nectar production: What are the Best Nectar-Producing Flowers for Bees?

Raspberry can grow in almost any soil and in some shade. But ideal conditions for raspberries are sun for most of the day and deep, rich soil. Heavy soil, containing clay, is much better than light, sandy soil.

Raspberries grow best in moderately moist soil. Hot and dry conditions are best avoided, but waterlogged soil should be avoided as well.

When planting raspberries, mix well-rotted manure and compost into the soil. Put compost and manure around the plants each autumn. Raspberries require regular fertilization because of their strong annual growth.

Do you cut raspberries down every year?

In late autumn you should cut down to the ground canes that have finished fruiting. Depending on the variety this will be either (1) all canes or (2) canes that are two years old.

(1) If your raspberry fruits on the current year’s growth, its shoots will emerge in spring. They will flower, produce fruit, and die off completely in autumn. They are therefore all cut down to the ground in late autumn.

Raspberries have long spreading roots and their shoots do not always emerge in the same place each year. It is absolutely fine to cut down any shoots that are weak or are growing in a wrong place.

Does raspberry need a trellis?

Raspberries can grow perfectly well without supports. Commercial growers usually install supports to make it possible to use of machinery. In an amateur garden, however, supports are a matter of preference.

Supports can make the plants look neater and stop the canes bending in rain and wind. They also ensure that the plants are exposed to the sun evenly. In addition, they make collecting berries easier.

To create supports, posts are put up every 3-4 meters along the rows of raspberries. Wire is then stretched between the posts. Young shoots are tied to the wires each year and cut down in late autumn after fruiting.

Raspberries in a small garden

To create a really stunning display in a small garden choose varieties with large beautiful berries. Plant 3-4 canes in an open position, leaving a distance of about 1m between the plants. Ideally the soil should be deeply dug and fertilized with compost and manure.

Put a 1.5m pole next to each plant. In spring loosely tie 3-6 best and strongest canes of each plant to the pole, cutting out the weaker canes.

Water during the growing season. Occasionally loosen the surface of the soil around the plants with a fork.

When well looked after, the plants will produce large berries and will look beautiful throughout the season.

One of the best recipes for eating fresh raspberries is a croissant stuffed with raspberries. It is extremely simple to make.

Cut a croissant into half, either length-wise or across, it does not matter. Make an opening inside and fill with as many raspberries as would fit in, crushing them gently with a teaspoon.

Moist raspberry filling holds together very well and does not run out. The croissant can therefore be cut into smaller pieces for serving. It makes not only a genuinely delicious, but also a very presentable tea or breakfast dish.

To make a more indulgent version of this, put thick double cream into the croissant first, before stuffing it with raspberries. This is absolutely delicious, but not really essential. A health-conscious raspberry-lover does not need to despair, because a raspberry-stuffed croissant tastes amazing without cream as well.

Posts related to ‘Growing Raspberry: a Perfect Fruit Bush for Any Garden’

Pin ‘Growing Raspberry: a Perfect Fruit Bush for Any Garden’ for later