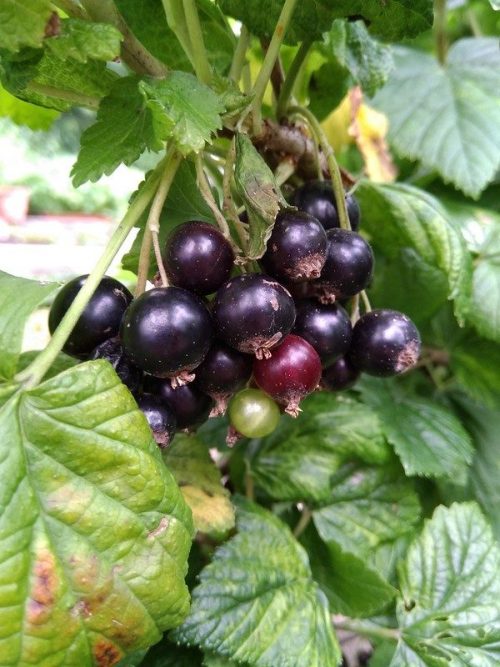 Blackcurrant – a Star of Northern Gardens

Blackcurrant (Ribes nigrum) is a native of northern Europe and northern Asia (Siberia) where it still grows as a wild woodland shrub. It has been cultivated in Europe since the Middle Ages, first as a medicinal plant and later also as fruit. It is used in herbal medicine to treat a wide range of conditions and is valued for its extremely high vitamin and mineral content. Its leaves have a lovely, strong and evocative smell (unlike the redcurrant that has hardly any smell at all) and are used as spice in preserves, for example, in pickled cucumbers and tomatoes. Currants flower very early in spring and their small green flowers are rich in nectar, providing a wonderful resource for pollinators at a time when flowers are few.

As a woodland plant, blackcurrant grows best if given some shade (unlike the redcurrant that requires an open sunny position), though it will grow in full sun as long as it gets enough moisture. Deep shade, however, should be avoided  – in this situation very few berries will be produced. Blackcurrant prefers soil that is slightly alkaline, rich, heavy and moist, but not waterlogged, and grows well in low lying areas. In dry, hot conditions berries will be small, and will dry out and drop quickly. Blackcurrants do not require a regular fertiliser, though well-rotted manure or compost can be put around the plants in autumn after digging up the top layer of soil, and left in place for spring and summer to provide cool moisture that blackcurrants need. This is particularly important to do if berries become smaller and growth slows down.

It is very easy to propagate blackcurrants by cuttings. All you need to do is to cut a 20cm long shoot that developed the previous summer, and is a year old, in spring, before leaves open. The shoot should be planted vertically in a bed with loose humus-rich soil. Make a hole with a stick or a pencil and insert the cutting, leaving two buds above the surface. Firm the soil around the cutting to ensure it has a good contact with soil, and water well. Ideally put some well rotted manure around the cutting. The best position is in half shade – both full sun and full shade will slow down the development. Water twice a week in dry weather. In good conditions both buds will produce shoots that can grow up to 50cm in one summer. In autumn the cutting can be moved to a permanent location (if required). If the cutting developed a single shoot, prune it in autumn to four buds, if it developed two shoots, prune each to two buds – this  will help it to develop new branches next spring. Blackcurrant bushes grow to about 1.5-2m tall and should spaced at 1.5m.

Blackcurrants are best known as an essential ingredient in ‘summer pudding’, but there are many other uses, such as the following. Liquidise blackcurrant berries. Add an equal amount of sugar. Heat, constantly stirring until sugar is fully dissolved. Put, while still hot, into sterilised jars. Close with airtight lids. Because the currants have not been fully cooked, the jars need to be kept in the fridge. The advantage of this method is that the berries keep their taste, smell and vitamin content better than with other recipes. The mixture can be used in the same way as jam, on ice-cream, and to flavour cold and hot drinks.

In spring collect some leaves, as they start opening, and brew as tea in a cup or pot. This makes a wonderful aromatic tea believed to be beneficial for skin disorders.

Blackcurrant juice sweetened with sugar or honey (two teaspoons to half a glass of juice)helps against cough and the particularly against the loss of voice following a cold. Take two tablespoons three times a day. In herbal medicine blackcurrant is also one of the best products for treating anemia; it lowers blood pressure and stimulates cardio-vascular system. Blackcurrants should be avoided by people with hepatitis, thrombophlebitis, conditions caused by high stomach acidity, and in pregnancy.