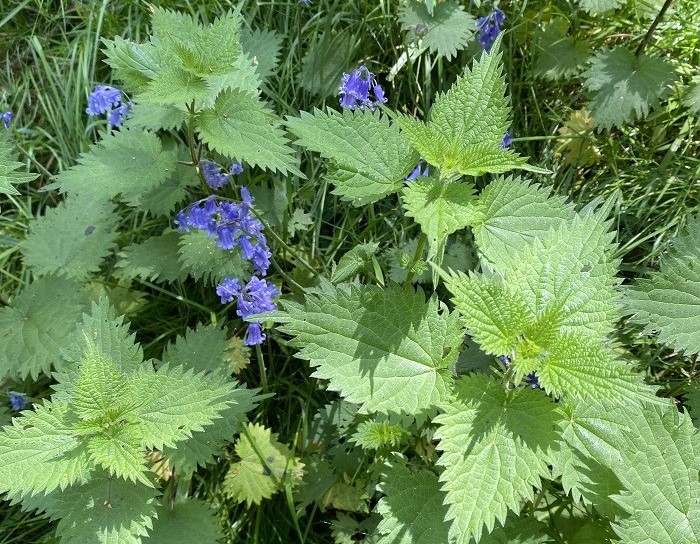 As children we learn that nettle stings and tend to think of it as an enemy. In reality it is a very good friend – a useful and beautiful plant. It offers numerous benefits to humans, animals and other plants. Its valuable qualities by far outweigh its problems.

In spite of all the challenges nettle throws at us, such as its stinging and an invasive habit, we are very lucky that it is so widespread and plentiful.

Nettle as a weed

Stinging nettle is a perennial plant, often classed as a weed. There are many different varieties, but the most familiar is the common nettle (Urtica dioica).

Nettle loves rich soils with a high nitrogen content, and on them can grow huge, forming a real jungle. It can quickly cover large expanses of fertile land, including, of course, our gardens.

Nettle spreads primarily through its roots. Its stems die in autumn, but the roots stay alive under ground, and produce shoots in early spring.

The roots quickly spread in all directions. And nettle is very good at defending newly conquered territory because of its fast and early growth, as well as its ability to sting.

How does nettle sting?

Nettle has a very ingenious stinging mechanism. On the surface of its stems and leaves are numerous sells filled with acid and other irritants. Every cell has a tiny hair with a very sharp end. As soon as you touch a leaf, the cells burst, the hairs pierce the skin, and acid is injected into the wounds. The result is temporary inflammation, including burning, itching and redness.

Nettle’s stinging, however, is a defence. If it did not have this ability, it would probably have been entirely eaten by animals. It is highly nutritious and very good to eat.

Nettle as an edible plant

Nettle is an important, and certainly underappreciated, edible plant. Nutritionally, it probably exceeds all other green vegetables. Its young spring shoots before flowering are best for food. They are rich in vitamins, particularly vitamin C, and minerals, particularly calcium and iron. Nettle is unusually rich in protein, and because of this is rightly described as superfood.

Importantly, nettle shoots appear very early in spring when few other vegetables are available in gardens. This was particularly valuable in the past when people’s diets were strongly dependent on the season. But nettle is still appreciated by those who prefer seasonal and local diet that includes wild plants.

Needless to say that nettles are plentiful, difficult to confuse with other plants, don’t cost anything and do not require effort involved in growing your own fresh vegetables. They are very common, so one does not need to worry about harming nature. They are also entirely organic, as long as they are not collected in polluted areas, such as busy roads and agricultural fields where harmful chemicals are used.

When nettles are young, they sting very little. Their tops – tender young leaves and buds that are used as food – practically don’t sting. If necessary, they can be collected with bare hands, though it is still better to wear gloves as a precaution.

Once collected, nettles are washed in cold water and chopped. They can be then used similarly to spinach or young cabbage in vegetable dishes and soups. Usefully for aesthetically-minded chefs, nettles preserve their green colour when cooked.

The leaves of nettles can be also used in salads. To stop them stinging, they a scorched with boiling water. Nettles combine particularly well with boiled eggs and potatoes, but also with all salad greens.

Nettles are useful not only to humans, but also to animals. They were traditionally given by farmers to cattle and poultry as a nutritious and medicinal addition to their diet.

Nettle as a medicinal plant

In the past, when people knew medicinal properties of plants, nettle was greatly appreciated and used to treat many illnesses. There are numerous recipes using all parts of nettle, including leaves, flowers and roots, sometimes in mixtures with other plants.

Nettle tea was a popular vitamin drink. It is still sold today as herbal tea. Such tea can be easily made at home. Nettle leaves are collected in spring and summer, and dried in shade. Three tablespoons of dried, finely chopped leaves are brewed in two glasses of boiling water.

Nettle as a healer for other plants

Nettle as a soil improver

Nettle can significantly improve the health of the soil. If you take a hand trowel, and dig at the roots of nettles, you will be impressed how well-structured and rich is the soil. The roots of nettles release a large amount of organic chemicals into the soil. The chemicals are used by flourishing communities of bacteria that make humus, organic matter that forms when dead plant material breaks down.

The longer nettles grow in the same place, the more they improve the soil. Such soil is excellent for flower or vegetable gardens.

It is possible to make a superb, and entirely natural and organic fertilizer for plants from the stems and leaves of nettles. If such fertilizer is used to water flowers and vegetables, it will improve their health. Their leaves will be bright green and they will produce good flowers and fruit. Fermented nettle is an effective and cheap stimulant for plants.

Nettle stems and leaves contain up to 50% of nitrogen. The fertiliser is therefore useful first of all where nitrogen is needed. And it is required by all plants when they grow.

Nettle fertilizer should be used with caution on plants, such as tomatoes, that, if given too much nitrogen, can produce excessive growth of leaves at the expense of fruit. To make a fertilizer for tomatoes, it is best to use a mixture of 50% of nettles and 50% of other garden weeds. Comfrey is particularly recommended for tomatoes because it is very rich in potassium and phosphorus.

Nettles also contain up to 37% calcium, 34% of potassium, 6% of magnesium and microelements, all useful for most plants.

Nettle fertiliser is not recommended for peas and beans, and for onions and garlic, because it suppresses the growth of these plants.

1. Collect nettles and roughly chop them (this can be done with kitchen scissors). Avoid using nettles that have finished flowering and produced seeds. Seeds will inevitably make their way into the soil and help the nettle to spread around the garden.

2. Put chopped nettles in a container making it half full. Do not use a metal container, because metal will react with the fertilizer.

3. Add warm water, about 30-40C. It should not be hot, because hot water will kill useful bacteria and slow down fermentation. Do not fill the container to the very top, because the volume will increase somewhat when fermentation starts.

4. Leave for two weeks mixing every day. It will be ready when the colour turns dark and the amount of foam diminishes. The mixture will have a strong smell – this is normal.

5. Use the fertilizer diluted with water in the proportion 1:10.

Yet another useful addition is ash from burning wood. It contains various minerals useful to plants. Add 1 glass to 10 litres of fertilizer.

Nettles can also protect plants from some pests. To make an organic insect repellent:

1. Collect approximately one kilo of nettles and put them in a bucket.

2. Add water, cover and leave for 24 hours. During this time acid from leaves will pass into the water. This water can then be sprayed on plants to deter aphids and caterpillars.

In the past nettles were raw material for making cloth. Their stems contain highly durable fibres that can be used to make textiles in the same way as linen.

The cloth is not as soft as cotton and silk, and is indeed more similar to linen. But of course, there was a time when Europeans did not know cotton and silk, that were both imported from Asia. At that time textiles from nettle, hard-wearing and cheap, were very popular. Nettle fibres are so strong that they were also used to make rope and fishing nets.

Recently several European companies started to produce commercial textiles from nettles. Such products have a potential to be cheap and beneficial for the environment, since nettles improve the soil and can be grown without pesticides, herbicides and fertilisers that are all heavily used in the cotton industry.

Posts related to ‘The Benefits of Stinging Nettle: What is it Good for?’

Pin ‘The Benefits of Stinging Nettle: What is it Good for?’ for later